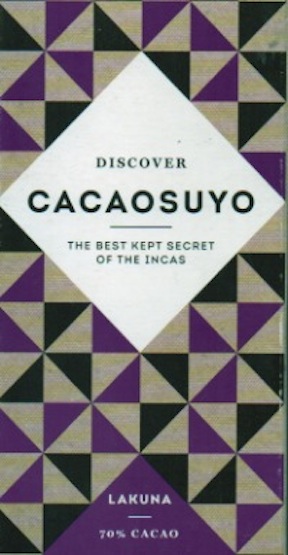 Impact
Chocolate represents a lens unto the world, thus a microcosm of it. Sweetness & euphoria mixed in with nepotism & shill-fluencers.

Aroma   7.9 / 10
Cuzco 80
80% cacáo-content
pungent & vibrant; equestrian & canine
horsetail + dog sweat
bales of hay
laurel canyon
settles, thanks to that straw bed, into a golden molasses that spirals around a fruit-loop
sums up 'trippy'

Piura Select
70% cacáo-content
malted ferment tangs up a, what else?, pitanga fruit plume

Lakuna
70% cacáo-content
wafts out very dry, arid as a cinder block -> quickly turns "wet" on sour bar-b-q sauce, then aerates, miraculously, on melon!!! to bloom forth a chocolate garland of fruits 'n flowers

Piura Select
direct transfer of aromatics... lots of wooded lots... until a sticky stringent pine grip at the back (both pineapple + pine needle) -> Tootsie Roll out

Piura Milk
WYSIWYT (what-you-sniff is what-you-taste) in a turgid / plodding Texture... constant steady state of virtually no progression highlighted by black fruit gradually emerges at the very back held aloft by the cream quotient as a burnt raisin that comes fore in the guise of a super sweet blackstrap mission fig -> port -> more black -- black mushroom cloud of a Milk Dud® covers all at the slow finish -> slight quinine after taste

Lakuna
streaming tannic fruits, including cacáo of course -> fudge -> snagged in a bramble along chicory root before releasing not-too-bitter almond at the back -> banana-plum (sensational) -> blackberry (not bad either!)

Quality   17.8 / 20
Cacaosuyo prides itself on a self-described Incan heritage (Tawantinsuyu). Sure enough this leaves the cacáo seeds largely free from over-processing. As in before the stove & the oven appeared, & getting too close to any campfires risk burning the beans. Not a "hands off" approach; but a generalized light hand taken to them.

Cuzco 80
Potent as expected for an 80%-class chocolate, & piercing on account of the acidity. Surprisingly, however, semi-sweet. Brazen for sure; even barbed; therefore far from everyone's mass-appeal taste.
If Bonnat's renders this regional cacáo a Naked FlavorProfile & Shattell delivers it as Spices 'n Herbs, this then pure Twang juice.
All factors considered, it underscores quality control from selection to processing & sums up a wild mien yet well-mannered.

Piura Select
Awww, so precious wafer-thin 25-gram bar mold -- the counterpoint to a wood paddle of a flavor profile. Plus those acids -- a growing signature of Cacaosuyo. Among the most abrasive Piuras to hit the market. Ripe for jaded palates scraping to unearth their tongues.

Piura + Nibs
Other than just a last lick or two of the Piura Select (above) with which it shares a regional appellation, this bar diverges widely from that bar. The difference largely on account of the white-seed cacáo herein which creates a milder contour overall with those softer lactic acid compounds for milk-like FXs & generally sweeter definition to the fruit associations. For example, that raisin so pronounced to be amplified to the point of an additive!!! All the more stunning considering the Nibs tossed in which usually weigh on & pull down the profile. Almost the opposite occurs.
Cacaosuyo really scored / scores with this one.

Piura Milk
Once it hits stride, just no letting up.
Among the densest Milks since... well, Holy Cacáo.
Further sublimates the white-seeded Piura with the lactose mother of 'em all -- dairy milk itself.

Lakuna
Big, buxom, bold without bulldozing the senses. Enticing & inviting instead. Such charisma minus any ostentation.
Cacaosuyo turns up the fire pit a bit on this one. Just by a notch or two to warm the flavors for shades of Beníano in its purple fruit countenance. A full-spectrum FlavPro; + Texture to match that starts thick only to melt fluid.
A bar that checks all the boxes. And merits a review of its own. As a matter of fact, the C-spot™ devoted an entire one to it singly back in the pre-"New Abnormal" times in the ancient year of 2014. Updated here & now & ever better.
Could stand maybe 2% more cocoa content to temper the exuberance by a hair & equilibrate a breath more heft across the board but that's quibbling over near-perfection.
Superb.