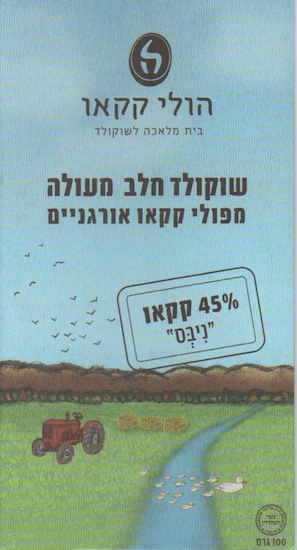 Impact
Nibs in Milk Chocolate have been around at least since S-B's Niibby MC. Nothing new there.

The novelty nowadays comes from the difference found in milk around the world. Indeed, the hills & pastures drip with it, sometimes at the expense of forest cleared for cattle grazing.

From the alpine meadows of the Swiss Alps & the Tyrolese heifers to the wild grass-fed cows in the Lithuania countryside, milk & its manifold -- snob-alert -- "nuances" run aplenty to launch a connoisseur site for "lactophiles" in keeping with trendlines that see urbanites paying top-dollar for experiences like eating in the dark, in silence, in handcuffs in order to heighten the senses via sensory deprivation.

Being so malleable, chocolate of course lends itself to any which way of 'this or that', however it pleases.

And so this from Israel.

Visitors to the holy land probably notice that milk there is packed in irradiated "shelf-stable" cartons whose expiry can be... millennia... just in case Armageddon, nuclear or otherwise, does strike.

A bar that bears the benefits of such arrayed forces. Reverberates for days with shockwaves of giddy-up flavor.
Appearance   3.9 / 5

Turgid yet flaky Texture mimics the Flavor. A combination of heavy fat content (both cow & cacáo) plus those Nibs apply some brakes to the fluidity while crisping the mouthfeel. In the process, milk becomes nicely subservient to a host of other components / compounds that steer this bar off into a confection-dessert direction beyond traditional Milk Chocolate.

Doesn't cream the jeans in the ordinary sense; instead it reverse-stimulates them (genes, that is) with sclerotica.