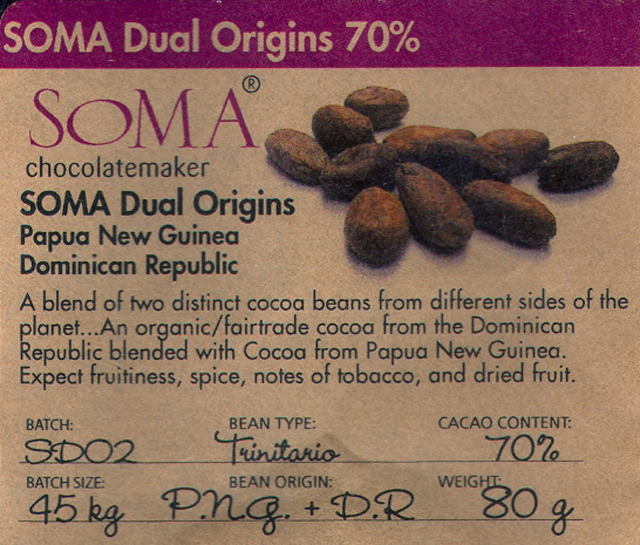 Impact
A novelty blend: 2 tropical islands tied together from opposite ends of the planet. One just north of the equator in the Caribbean Sea on the Atlantic; the other just south in the Coral Sea of the Pacific. But both grow a crop that sources a fair amount of Venezuela cacáo, making them sort of astral twins.

And, oddly, together they forge vast tundra of flavor that dredges up Robbe-Grillet, that originator of the "new novel”: disjointed on the surface but welded in the subplots as a cubist painting.

In Robbe-Grillet’s The Erasers, based on Oedipus from ancient Greece, a detective investigates a murder that has yet to happen, only to uncover he’s fated to become the assassin.

In some ways a straight composite of Soma’s bars that comprise this dual-origin blend -- anatomized as DR (shorn for the most part of its acidity & left brooding with a small vent of fruit) & PNG (smoked sap) -- simply layered, their joint difference however being the compression at the bottom end of the spectrum to bring this low; all those deep-seated viscous notes (almost to the point of listless) melded together in Soma’s firm-handed roast.