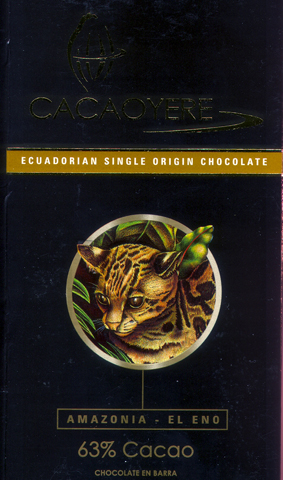 Aroma   8 / 10
tightly-packed / starts flat on its back: Cocoa Puffs (incl graham cracker), brown sugar & concentrated nicotine paved under tar & tea which spar over a lacquered bamboo mat -> as usual for Cacaoyere, once the wrapper blows off for good, the bar opens up... here peppered oak & deep-set exotics woods
Mouthfeel   10.8 / 15
Flavor   42.6 / 50
unsheaths a fruited chocolate bang (detonating blackberry & pomegranate pom-poms) -> quik loganberry cough-drop molded from a 25-year Ferreira Port syrup w/ lots of sediment dregs at the bottom of the bottle -> cocoa pwdr -> brown sugar to cane juice rises to the level of white cake frosting... enter the Fun House -> toothache sugar -> white / yellow starburst fruit (pineapple, starfruit, white currant, naranjilla, pitomba/apricot & wild mangosteen) wheels around juicy fruit (grape & granadilla) -> sweet-rice fruit-leather (ni-ng gow – the fireworks at a Chinese New Year’s) w/ papaya -> hops off the carousel stringent cocoa
Quality   15.9 / 20
Shades of compatriot Kallari - minus all the vanilla. From roughly the same area, roughly the same production method, roughly the same cooperative economy, & roughly the same result: rough... but a glaring difference too. Neither that vanilla nor overburdened by butter, this bar shifts the imbalance to sugar, treated to rugged mixing ala the Azteca-style of crystallized sugar. Unintended in all likelihood, based on the lecithin employed & Cacoyere’s other bars that strive for smoothness. Just pours it on hoping to make a Hope Diamond out of cubic zirconia when there’s no need, since the good growers who tended this harvest might be mining the real thing.

Fruits galore that the cocoa-geeks at Tcho could do worse than travel north from their Peruvian mobile lab & pack this for their “Fruity” bar. So over the top & then back up again in a kind of parabolic rotary installing a fake-delicious candy wheel. Borderline cloying; about 5 percentage points over what tooth enamel normally handles & this cacáo’s optimum threshold, which evidently hails from good tree stock. A region teeming with activity since as least the colonial times as a vital transportation artery between the mountainous Cordillera & the Amazon river.

This bar’s rather pale color reflects both its high sugaring & maybe its descent from cacáo bearing white cotyledons (seeds), hence the report in 1894 that primitive ‘wild white cacáo’ saturated the area - but of weak vigor & low survival. In all probability a non-Criollo, homozygous recessive genotype, lacking the pigment gene.

The Sucumbíos growing zone (the triangle between the Coca & Aguarico confluence heading east to the Naop River) also hosts, as expected, increasingly purple seeded varieties too.

Well, it teaches nothing in way of a chocolate flight for Ecuador other than how a central processor in Quito interpets the sugar variable. 4 different regions sporting wildly varying cacáo-content negates any horizontal tasting, leaving little evaluation of each micro-terroir. Ditto the quality, ranging from just above poor (Bolívar) & average (this Amazonia) to excellent (Esmeraldas -- as usual the current crown jewel of the country).

Lacking much in the way of definition, Cacaoyere instead floods the market with product bearing a sympathic backstory: farmer co-ops bucking the odds to maintain a way of life, preserve forest sanctuaries by growing cacáo & other resources to stave off oil drilling & timber logging bent on cutting it down. How much of this comes real versus how much shows up a redbathing chimbo like from another label striving to burnish its "responsible" credentials, the suspect República del Cacao, remains to be seen.

A noble fight if true, & probably just in the middle rounds, so expect more of it &, hopefully, more from it.