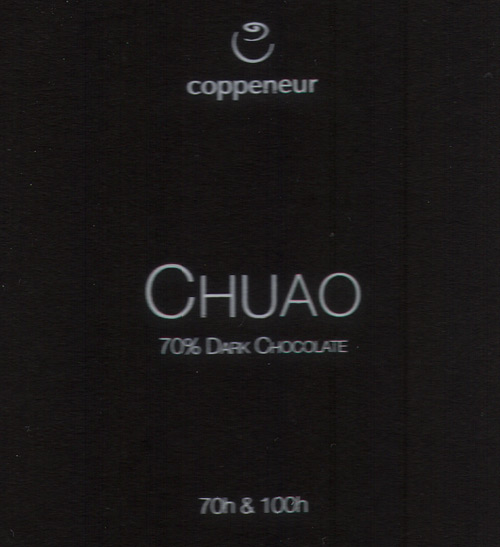 Impact
The Angel Falls of chocolate, or more aboriginally-speaking the Parekupa-meru ("waterfall of the deepest place"). The world's highest at over 3,200 ft, with an uninterrupted drop of 2,600+ ft, a height so great that before coming anywhere near touching down, the cataracts atomize thanks to gale-force winds & turn to mist.

That it drops from the flat-topped mountain called Auyan-tepui ("House of the Devil") into the Rio Churun (“thunder river”) of remote jungle south of Chuao in Venezuela possibly means that Coppeneur discovered a true secret: viz., that quality lies in the details... & God’s interested in the outcome.
Appearance   4.9 / 5
part of an all-Chuao boxed-set collection that bears striking resemblance (as in right on the head pin) to Marcolini’s packaging
Aroma   8.7 / 10
first draft flatter than a nut macadamized into gravel, then – POW! - dried apricot right on the nose (a morphallaxis of Chuao’s signature strawberry) & close on its heels floats blueberry blossoms... subtle... soft... serene... very breezy, well-oxygenated, loaded in ions adrift w/ neighboring Porcelana-like breadcrumbs
Mouthfeel   13.5 / 15
Flavor   47 / 50
fresh blueberry cocoa -> sweetens to dried blueberry chocolate while simultaneously darkens to a plunging apricot on clay (apricotta) -> sour granadilla evaporates toward White Chocolate plantain -> rippling chocolate-tinged blanched almond-milk carrying creamed abiu fruit, tonka, & chamomile to make some hay
Quality   19.6 / 20
More than just a newer-fangled concept in marketing of skipping over cacáo-percentage hype (70%, 75%, etc... the province of manipulators) in favor of advertising conche length instead. In this case 100h (for hours) vs 70 for its box mate, to highlight the properties of churning or conching cacáo – while presumably holding other variables constant (such as roasting; both this & the 70h clocked-in at 45 minutes with a roasting-curve hovering around 260ºF). Felchlin probably deserves first credit for this wrinkle since it started years ago to prominently feature conching time along with, of course, cacáo-content.

Coppeneur’s 30 hour differential between its two Chuaos represents a subtle approach to other more crude conching exhibitions which usually demonstrate this art thru a drastic comparison between conched & unconched (again, Felchlin serves as the prime example with its Centenario pair - Crudo and Concha).

Critics may charge 100 hours of conching is absurdly long; that diminished in all the churning ‘n turning which constitutes conching are the volatiles found in conventional 70 hour versions necessary to maintain flavor tags (sublimated here, particularly smoothing the bitter tannins & rolling off those gripping acids); that would feel a bit stripped to the bone, especially toward the finish (where taste evaporates into faint flavors, then mysterious mists); & results in briefer life-span as length gives out relatively early, starved of stamina & short of breathe (without altogether dying either).

All true but, hey, what do critics know? (the C-spot’s™ quite familiar with ‘em.)

As a general rule, 100 hours on the face of it sounds ridiculous. But everything with cacáo is situational & circumstantial, all of which needs to be factored in to transform its customary bitter seeds into a chocolate glory.

Coppeneur has calibrated carefully in shaping the flavor profile. This Chuao crop possesses a lot of strident compounds on account of likely under-fermenting, more clearly seen in the 70 hour version, despite a reported 6 day ferment. It needs to be gymed-up. 100 hours suits it fine.

A Chuao reduction: think consommés & sauce cuisine which nucleates or intensifies thru evaporation. Gets the hooks deep into the central reward-centers of taste-buds connected to the brain.

Prior to his departure from Coppeneur, Georg Bernardini called this their masterpiece, the one they're most proud of. And rightfully so.