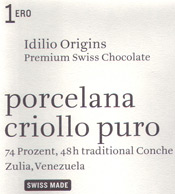 Both gold & chocolate mesmerize humans. Both are sold in bars. Both have reached record highs on the commodity markets. Similarities end there. Gold supply is finite in quantity. Chocolate, on the other hand, engenders an infinite quality.

Take this Porcelana, for instance. Reverential... in pursuit of ultra perfection... in respect of all Holy Grailers who adore the Goddess Porcelana. So imposing, it can unnerve, turn frowns upside down. Before long the pulse beats a little lifeless, sluggish & downcast; listless as a porcelain cup from Nymphenburg with nothing in it, showing the first signs of hairline fractures -- a denizen living the lo-tech hi-life. Next: droops into depression, almost suicidal out of fear of death. Then memories slide away, slippery over the elision fields that lack any dimension when, finally, amnesia sets in.

Just the grim reaper sent from the future to hasten the demise?

It all sags down; a dowager with countenance to suit. Still, her diary entry for this saga contains: “I feel like some underworld chieftain; cut off my imaginary royal rings from seasons of past glory from my hand, along with the 9 fingers that go with them. I only have one finger left... to flip the Bird!”

In other words, ratings aside, this remains an impervious queen of chocolate with a certain cold formal beauty.
Appearance   3.2 / 5
drab
Aroma   9.4 / 10
simple & stately: caresses Milk Choc tones that exude hazelnuts & almonds -> tobacco puff in the center & toasted tonka on the edges; nothing extraneous, nor a shred of artifice, only pure business; let sit to open for a sweet melonic symphony (honeydew, pepino, & most pronounced kiwano w/ its green scent – all of positive verve) then shagbark hickory & lucuma evoking maple sap
Mouthfeel   11.9 / 15
Flavor   45.3 / 50
gravel & granite quickly pass over chocolate & nothing but... but for nuts (pistachio, macadamia, almonds) -> flambé skin of crema catalana / crème brûlée -> mocha -> small woods & salad greens resurrect pounding hazelnuts w/ intermittent tonka -> late-staged evasive mamey sapote
Quality   17.1 / 20
Felchlin, the actual bar-smith after Idilio sets the parameters (part of the new private labeling that characterizes ‘manu-fractured’ chocolating partnerships) roasts up high (precious few fruit notes), then conches "only" 48 hours (yet feels longer judging by Texture; something to do with their open-air vintage machines that oxidize & simmer off the volatiles maybe?). Whatever the length, this bar's pulse beats a little sluggish.

Not bad per se, at all; beautiful in its own way, just featureless, forlorn, spare... without much punch or juicy excitement of, say, Domori’s (this just conches Porcelana's signature strawberry into sapote) or the unctuous butters of Bonnat (none as so much added here). And in contrast to the rather plodding melt, the chocolate flavor, though of high CQ (re: baseline cocoa without nuances) slides thru, slippery for the most part, lacking depth & dimension, save for those prominent nuts.