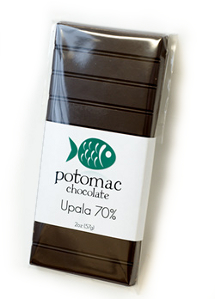 This, the inaugural release from the young barsmiths Justin Smith & Ben Rasmussen at Potomac Chocolate, flirts with brilliance before descending into the dim afterglow of its own shadows.

The mix of flavors points away from conventional Costa Rican cacáo trees & in the direction of CATIE – that country’s research center & one of the 2 main genebanks in the world. The stuff of fabricated pedigree... new stocks concocting a functional hybrid engineered for yield, disease resistance & a drop of ‘fine-flavor’ veneer.

Potomac handles it fairly; lowers the temp on the oven roaster compared to the burn-marks in this bar’s 82% sibling (a judicious choice), offset by an excessive conche (noticeable in the taut Texture & collapsed progression). Results in a listless though not necessarily lifeless chocolate. A bar whose character goes wandering in search of itself.