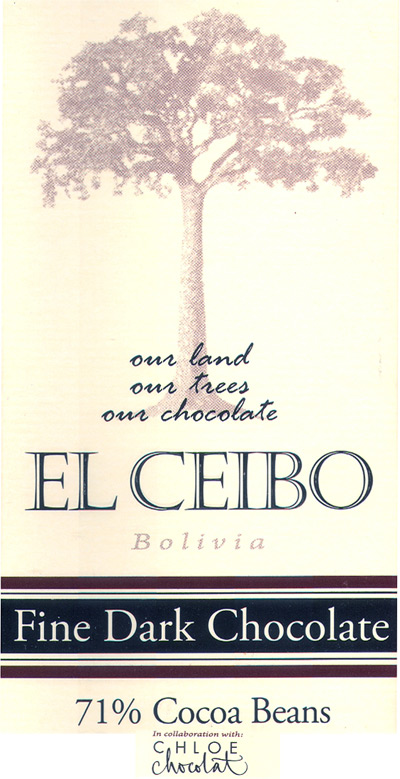 Impact
Wow, so this is what Chloé tastes like, errr, what she likes to taste.

Le Chloé Bar – "in collaboration with Chloé" Doutre-Roussel. Ever since that harshdown by her nemesis exposed her as... well, less than fully-clad Chloé, the doyenne of haute chocolat has seldom been heard from... seemingly gone underground... until this -- the best revenge. (WARNING: the challenger has a ferocious response of her own.)

Thru all the controversy, Chloé maintained her right to remain silent (then sent her proxies out to defend her honor) & for penance sentenced herself to community service & self-imposed exile helping the El Ceibo cooperative in Bolivia, a group of indigene growers who tend to a heritage harvest – Beniano in Alto Bení. There she assisted them, presumably, in the practical steps of the production chain, from proper fermentation right thru conching & molding to live up to their motto ‘Our Land, Our Trees, Our Chocolate’.

Or is it just a licensing agreement, a crass marketing endorsement?

Whatever the relationship, the results don't lie even if her own assertion in her little pink-puff piece does; specifically, that "every time I eat organic chocolate a little voice in my head says: 'Just let me give a cheque to the co-operative, but please don't make me eat this!'"

Stronger than Divine, or Kallari, or Medécasse, this the most potent of the recent wave of in-country plays yet to come to market.

More than the ERA ever could, the bicycle & the Twist & Panty Hose™ & chocolate liberated women. Don’t take any guy’s word for it; check out Gail Collins’ When Everything Changed.

The CBS (Cocoa mass/Butter/Sugar ratio) printed on the nutrition panel also seems suspect: ~2:3:3. The mass on this feels much greater & pounds heavier than Felchlins’ 68% Cru Sauvage, sourced downstream in Bajo Bení, & just 3 percentage points lighter. This bar can easily fake its way in the 75% - 80% class.

Very little kidding around here. A power-chunk right in the wheelhouse for a chocolate complex... cubed. Phenomenal range, depth, scale & energy multiplies a quantum force of unreal event horizons that superpositions on the abyss of a black hole (flirting with coffee, dirt, & volcanic thunder) but never goes under the edge of disappearance into that lost sinkhole. Rather, it forever maintains poise under tremendous pressure.

Technically a bit off of world-class standards, which cost it some ancillary marks (Appearance; Texture; Quality). But with Flavor like this, who can squabble?