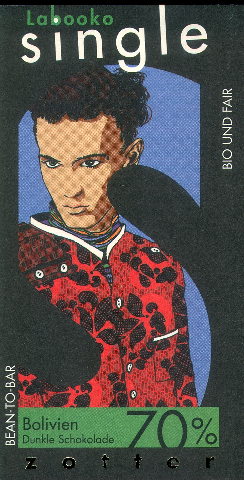 Impact
A Chocolate Postcard from Bolivia: Fly in to the second biggest city Sucre (that’s right, suga’), when all the hubbub has cleared out & the pan pipe players blow a little hungrier. Then take a slow bus to La Paz via Lake Titicaca, & end up in the Potosi mines a week later.

After 2 days rafting around Lake Titicaca (elevation 12,500 feet!), took a left turn in the Mercado de Brujas in La Paz & things have been pretty cool since meeting diplomats’ kids in the posh zone of the Bolivian capital & going to their homes; often more adventurous than climbing Mt. Illimani! Seriously, if there’s scant coca leaf to be found in this impoverished ville since the CIA eradication of the Chimore-area kicked in, there’s plenty of cocaine -- & refusing the stuff makes one into somewhat of a welcome oddity for these locals more accustomed to bored globe-sniffers. La Paz rocks, perhaps the friendliest city ever... the Aymaru never lost their smiles in the wretched silver mines. Even when they trail you to rob you they keep smiling; it’s wonderfully eerie. And another reason why gringos play poker: to read bluffs & facial scrabble beyond luck & intuition.

The spadework in this bar will hook hearts & transfer that grin to your p-p-poker face.
Appearance   4.3 / 5

Aroma   8.6 / 10
once the initial vinyl lifts... nut-buttered cocoa on a charcoal ceibo-wood counter -> peppered-fuchsia leads to a prune recess
Mouthfeel   12.3 / 15
Flavor   46.1 / 50
fudge base, over lightly stoked charcoal briquets, ignites a chocolate bang -> low hanging prune in the backdrop promotes some gorgeous finishing fuchsia
Quality   17.9 / 20
Another simplex from Zotter & rather uncharacteristic for a CNB, the processing neutralizes much color in this origin without erasing it altogether. Salt, Zotter’s inventive signature on chocolate, & the raw sugar cane possibly curb the activity level from the pulp that was fermented into the bean.

He also might’ve caught a dull crop. Or the El Ceibo cooperative in Bolivia shipped him field-seconds, hording the premium beans for themselves & their own label. Then again, this performs more akin to a 70% than El Ceibo’s bar that comes in at a mere 1% higher cacáo-content yet packs far more fire power. Obviously the mass-to-butter ratio largely accounts for the offsets & differing effects. Whatever the exact reason, credit Zotter for polishing these beans.

Compared to Zotter’s bars from neighboring Peru, especially Satipo, the generalized technique between the two origins (Bolivia & Peru) forms a kind of equalizer rather than a differentiator. Both almost squared to straightforward center-point chocolate, without much in the way of nuances. An over-simplification but nearly an accurate one.

However it goes down, both uniformly excellent... such as they are.