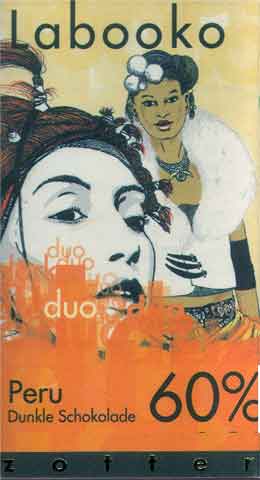 Impact
By the early 21st century, Peruvian cacáo took on the sordid rep of rodent-droppings infested with fleas carrying ‘brown plague’ best suited for rat-catchers. Josef Zotter would have none of that. He ventured off the beaten-down paths of so many chocolate death sauces in this country to find the good stuff. From there he returned home to become the Pied Piper of Bergl, Austria. This bar, along with his 100 and his 70s (the 16 versus 20 hour conche-exhibition), sends out a clarion call to children everywhere as clear as an Andean windpipe that the plague is ending & the time has come for tastes to emigrate back to cacáo’s probable cradle of origin.

Aroma   8.7 / 10
a bit out-of-place for Peru (mild & spiced) but in sync w/ itself: brazil nut, then lucuma backed by tree-climbing vines (chonta wood) -> suffused w/ salt ‘n pepper + sugar & pink peppercorn
Mouthfeel   12.1 / 15
Flavor   44.6 / 50
lucuma-sweetened spices (a parade of them led by a safrole compound but complexed bigger than allspice to rival hoja santa [Piper auritum] aka root beer plant [think a super-mix containing sassafras / anise / licorice / nutmeg / mint / tarragon / eucalyptus / black pepper])... all glazed in algarrobina (that starchy syrup made from Black Carob trees reminiscent of cocoa) -> hugs this rack forever & a day until gingerbread -> closes over an orchid
Quality   18 / 20
Excellent “small” chocolate. Unwavering hi-sparkle / lo-heels; charming & untiring to the point of excessively kind. Warm spices all over the lot as if the spice isle Grenada moved its root beer float of flavors onshore to the continent but without that island’s robust chocolate underpinnings.

The cocoa in this bar pulls from a fairly broad area in northern Peru stretching San Martin to Tocache along the Apurimac River compliments of the Acopagro co-operative which combines typical Peruvian Amazon with the new "Intiselect Cuvee". Selecting a variety of types & fermenting them as a blend pre-determines much of the outcome.

Zotter customarily formulates according to a bean’s minimal needs. His choice of 40% sugar implies a cacáo that goes wanting considering that classic Apurimac is the type that built Peru’s rep for dirt-sour cacáo (best revealed in Domori’s version). Ditto the 14-day sun-drying period that, if correct, suggests wild temperature fluctuation & precipitation.

This however approximates the caramelized features found in Dagoba’s Milagros – yet sweeter / less greener. Roasted low & light (30 minutes @ 266°F [130°C]) then slowly rolled. Conching starts on a long hot phase - when much of the flavor takes shape & gains its aromatic impact.

The sweetest “Dark” Peru & yet no fruit by-notes whatsoever; finishes cool in order to stabilize this into a lingering spice-monster cushioned in sugar.