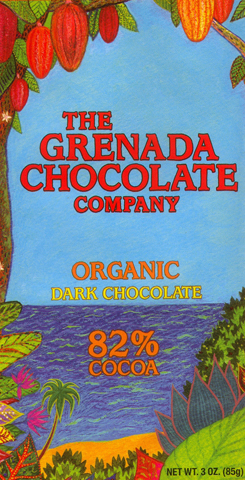 Aroma   8.7 / 10
generally leguminous: potent cocoplum / spiced-cocoa cut by some bletted mango -> nicely oxidizes to quince, then picholine before totally greening out & then some (with a traditional 4-spice blend) into a cola fizz... this baby means to be tasted
Mouthfeel   11.9 / 15
Flavor   36.2 / 50
false-aroma / false-start on blank breadfruit -> rushes in charged-coffee bending back to cocoa -> sweeter breadfruit, this round with passing plum -> pitch pine bark takes it up a notch, tacked with vague spices (vanilla, allspice, black pepper) -> all stacks conterminous until dry / stringent volcanic dust blows thru planted with some airbrushed leguminous greens
Quality   12.1 / 20
Grenada Chocolate pulls from several local properties consisting of a mix of around 16 cultivars, some inter-cropped & others of pure-stand cacáo. By the time these reach their centralized fermentary / manufacturing facility, they merge into relative uniformity under a solar-powered cooperative in the Caribbean that assembles the whole blend in one spot & keeps the valued-added profit close to home.

Treated to a 6-day boxed-ferment (occasionally water-sprayed) then sun-dried anywhere from 3 days to... a Claudio Corallo-length 2 weeks (weather-dependent).

Well, it must’ve been raining a lot... for very few encrusted casings seem to form on these beans.

Unforgiving; weighs in at 82% & feels ever more so; very little differentiation / progression to this chocolate stupefaction. So rough it lives up to antiquated notions of organic farming. A high smoke-point further pulls it in a downward pall. Only that vanilla-booster saves this from the brink of an all-out bitter insurrection. None of the bright fruits or sparkling spices of more recent, albeit sweeter, releases from this island (Camahogne or Burdick-75) in a sort of anti-Grenada campaign.

A bar to reconfirms that this year’s crop hammers away a cocoa of rather limited dimension. At this percentage, all the parameters must be precise & controlled. Few here are, which leave it in the rear of the same class as another 82 - Blanxart’s Congo – but for different reasons. Where that misapportions the butter, this gets stingy with it. Its CBS (Cocoa mass / Butter / Sugar ratio) at a very natural pitch of cocoa, with slightly higher inherent fat content (5:6:3), for an organically “balanced” but austere configuration approximating ~ 2:2:1.

The character of this chocolate, however, could benefit from added cacáo butter to soften the harshness & potentially carry some of those faint fruit tones forward.