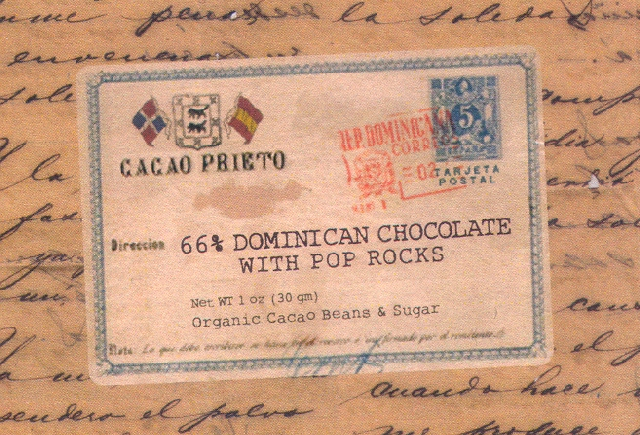 Impact
From Just Say ‘No’ to Let’s Move, America continues to teeter-tooter between binge-purge. Prieto solves the problem with a balanced diet: roughly equal parts sugar, fat & chocolate (add gassed-up pop rocks to stir the appetites of those fizz-kids still wiping away their Bieber-tears).

And kids, if you really want to explode the stomach, try spiking this with baking soda, vinegar & salt peter in dad's milk glass so pop then really rocks.

It catalyzes some unseen flavors in this label’s heretofore line-up, not to mention sensations.

Though this officially weighs in at 66%, it tastes much more in sync with Prieto’s 65% Rustic bar than the Regular 66% (without rocks).

With this & its Rustic mate, Prieto is emerging to be a player in the unconventional realms; quite unorthodox but more alluring so far than its “serious” offerings, which may strategically align with its aims to be all things cacáo (emphasis on all things seeing how it treats Theobroma cacao trees as some bio-reactor plant).

A chocolate of tremendous persistency, doubly so considering all the noise going on, summoning a forceful resistance to withstand that kind of literal sugar assault just as it yields to meld into it. Lesser types might’ve buckled under at the very onset & pressure of attack. Part of this, of course, forms a mere illusion created by all the sonic thunder & texture of the pop rocks; bluster really for what in actuality isn’t so great as it seems. A case of sensory perception exceeding the physiochemical properties.

No denying, however, the net effect: fun, stylized & damn near bold enough to be dangerous.

Can’t wait for what it next hatches.