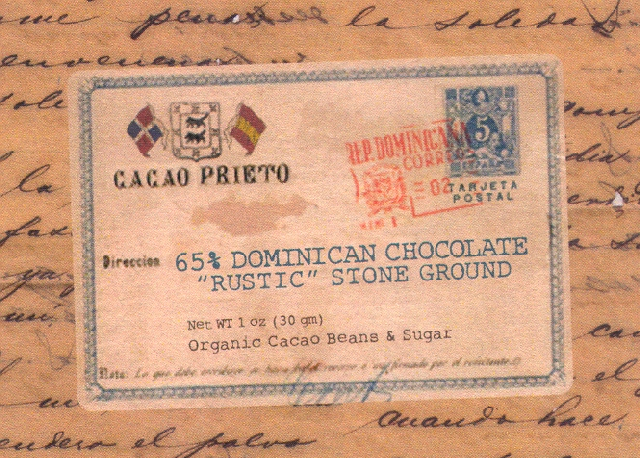 Impact
The label proclaims ‘rustic’ but that overstates what went into it & undersells the more genuine ‘rusticians’ like Bessone, Bonnat or even erstwhile Dagoba. The term 'Old School' applies a closer fit. To put it politely: lazy, wanting to get out of work & cutting costs.

Aroma   7.8 / 10
picholine -- the hallmark of Prieto’s early releases – coupled with a skunk of unmeltable queso de freir for an olive ‘n cheese platter -> gives off jute -> cocoa-raisin base; smells like Taza's teen-spirit in the house
Mouthfeel   12.7 / 15
Flavor   45.1 / 50
raw chocolate -> takes on a more roasted countenance to cocoa -> trips over red & barrels in wild strawberry -> juju dried apricot -> more reds (raspberry) -> & redder still (cherry & acerola) -> peaks at a simultaneous grape / Turkish fig (tremendous) pinnacle -> lightens & whitens somewhat (the edible flesh of cocoplum) -> winds out on a good cocoa flush lined in pink grappefruit
Quality   17.9 / 20
Very innocent & charismatic though certainly more processed than other competitors in the Old School category (think, again, 'Taza'). Those pretty much leave the sugar crystals whole. This at least grinds them down to around 50 microns – just below ‘sandy’ detectable levels.

With no added butter to back it up, this also experiences short length -- passes in a glorious flash -- but forceful enough to highlight all the fruits that Preito’s initial “refined” bars obscured, making this a reversion of (a much better) type.

It speaks of some proud cacáo inheriting good bones as it never relinquishes cocoa flavor interlining the profile once it establishes it after that false start of raw chocolate in an opening frame eerily similar to Soma’s D.R. Not the strongest core cocoa (a relatively light roast assures that), just adequate to serve the overall purpose in keeping with the intended style.