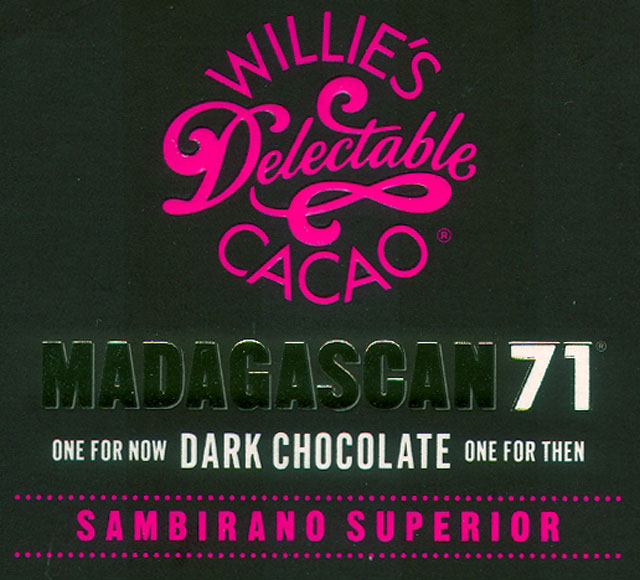 Impact
William Harcourt-Cooze, the cocoa-brain inside Willie’s Cacao, so desperately wants to be Wonka: the name of his company; his impish personality; the pinball machine of a website which strikes as a baroque counter between some western saloon shot by John Huston & an apothecary candy shop that Quakers might've operated with Loompas running among the slots; & finally, as if by birthright, like Roald Dahl, the author of Charlie & The Chocolate Factory, Harcourt-Cooze is also British.

This bar then represents his golden ticket to attract unsuspecting children -- young & old from Charlie Bucket to Grandpa Joe -- into his fold.

Going up the Great Glass Elevator, anyone?

In we go, then! But do be careful, my dear children! Don’t lose your heads! Don’t get overexcited! Keep very calm!
Appearance   3.9 / 5

Aroma   8.8 / 10
bemusing: 1st blush flashes none of the those reds so typically Mad but very wooden instead (cedar, palms & katrafay) -> sprinkling spices (vanilla / coriander) -> cranberry-caramel on the break wall... Willie sticking this to the roast -> opens up & breathes out chocolate-ylang sweetened in honey flowers (beeee-autiful)
Mouthfeel   12.4 / 15
Flavor   47.6 / 50
very exterior & upfront: without skipping a beat, picks up on those ylang fragrances -> cranberry issuing forth to hibiscus, then exploding raspberries -> vanilla orchids floating down a chocolate river -> not a bad squirrel nut but pecans & woods sucked into a rarefied fruit-caramel -> flows into a cedar bucket -> mounting acidity likened to pineapple & juniper (the bomb-burst cross to those earlier berries) -> soothed in almond butter -> sensational finale – a citrus gianduia stemwinder that lasts for an never-ending quest
Quality   17.7 / 20
Carries much more weight in flavor than its small size would assume. Total vacation chocolate / pure hedonism... so many bliss points along the road to ambrosial rapture in this chocolate wonderland. And so fully dimensional (highs / lows / mid-notes) & extroverted that even snozzwangers asleep in a coma will react to its absurd Mike Teavee length.

Just oozes charisma, energy & power; perhaps too much so, as it leaves no mystery unturned but flaunts immodesty with glee in a peacock of a bar.

It’d be just gush & poshlust except for the lasting character whose heart & tongue are in the same place... behind all the splash lies an inner strength... for an experience you never want to let go of.

Great pedigree, well-husbanded on the ground & then Willie romances these beans back in his secret office with all his guile – the usual pot roast / coaxing conche – producing a precisely-sugared gestalt of dark tone with bright imprints in company with Madécasse 80. The definition of flavor flags in that & this put Madagascar’s poor crops of the past behind them.

Even the worrisome Textural fiasco comes upright by the end, fabulously spherical & fleshy as foretold in its turgid 100% unsweetened parent. This cacáo’s butter ultimately melts thru itself to cover the particles with body & weight for seamless integration of flavor. And perfectly harmonized too... neither an off-note nor a whiff of garbage down the chute. Just free from any wariness whatsoever.

A party bar that surely has Willie hiding the recipe. And everyone should be fine with that because he understands sharing the fruits of his factory with rich & poor kids alike after whom, remember, the original story is titled.