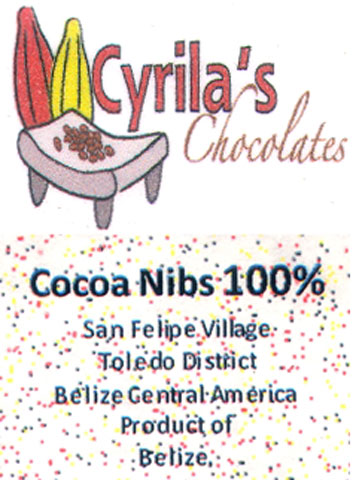 Impact
Meet Cyrila... Juan Cho's mother. He & his wife Abelina tend to 1,500 cacáo trees, intercropping all sorts of tropical fruits on but 5 acres. They go about themselves the best they can to rekindle traditional Mayan ways, apart from & yet a part of a country -- Belize -- experiencing the ex-pat influx descending upon it from Europe & the USA.

For now, they're unconcerned about boutique chocolatiers scurrying to find wrapping paper designs for holidays & gift items in upscale markets among the consuming North.

No, Cyrila's started out with an investment of zero dollars, zero cents but rich in an ancient tale with a modern message.

It's just what they do; how they live.

It entails sustainability, environmental stewardship, agritourism & the like, plus unity of purpose among aboriginal nations within Belize (Juan counts both Mopan & Q'eqchi' bloodlines in his ancestry). Cacáo, afterall, was fought over by Mesoamericans well before Columbus' gang showed up.

Tracing their roots back to the Maya who were at the very heart of cacáo cultivation & trade nexus within which chocolate culture reached its zenith over a thousand years ago, the Cyrila's represent but one family's story line in the centuries-long saga of Theobroma cacao which, particularly in its New World birthplace, parallels to a large degree the story of cultural ascendancy followed by a struggle for survival of the indigenous people living here, some of whom like Juan & Abilena continue to cultivate it to this day.

Is it possible that güeros are just being had with branding, in line with the green-washing & red-bathing campaigns of MNCs... part of the dualism Pof. Janine Gasco elucidates on how Mayans feel ironically locked in their homeland while having to contend with the modern global economy? (Sorry if reality sounds foreign from the media grins spouting happy-talk.)

But Juan, a multi-linguist who speaks several Mayan dialects, English, Spanish & a couple more Indo-Romanic languages &, who knows, possibly Madarin too, vibes a planetary aura from his tiny acreage: it's the right message at the right time, coming from a people who resisted to varying degrees the triple onslaught of conquistadores, catholicism & capitalism.

One way or another, it'll have an impact & an influence upon someone, somewhere.

And these nibs, so peaceful & gentle, are the kind that might've persuaded erstwhile warring Mayans to lay down their arms in overcoming their differences (more dualism: as well as being the cause of conflict, cacáo also served as a ceremonial toast & bond during high state occasions).

Were it only to do the same for the whole world too.

Aroma   7.8 / 10
BIG Banana (more than usual for this nearly-universal Nib-trait) in a cream pie (graham-cracker crust included) cut by rotting yeneri wood & fetid mango -> all's restored with the nut-like seed of the cocoyol palm -> oxidizes to cinder-block cement -> fine frosting
Mouthfeel   12.1 / 15
Flavor   47.3 / 50
mild cocoa -> crunches down into pumpkin seeds & pecan -> wax factor... with chicle in the upper corner -> husk of another nut (walnut) cerealizes Cocoa Crisps™ with sliced banana & shredded coconut -> some numbing on the tongue from nutmeg attended by late & latent bitter -> clears out a lightly-stringent Costus barbatus aka “spiral ginger” (edible parts taste of sour lemon)... white sapote & vanilla-coffee in the aft-length
Quality   17.8 / 20
Nibs... short for 'nibble' in this case. Incredibly benign; the kind that earned Belize its reputation... as in ancient cred from hundreds of years ago when Fray Bartolomé de Fuensalida said it tastes fine without any additives whatsoever.

And the methods employed harken back some to classify this as partially retro-American.

Yeah, Cyrilia's use some stone tools & a grinder & don't quite go all-in with a metate (for crushing the beans). But anyone would have difficulty calling their set-up a chocolate facility let alone a factory. The Chos basically operate out of their kitchen & their backyard. Yet that never stops them from taking aim at everybody's C-spot™.

Though untested, Juan believes 75% of his cacáo fits the Criollo category -- descendants of the classic heirloom varietal -- based on shape (including the characteristic nippled-apex), size (small), surface rugosity (or roughness) & seeds (low in number, maybe 30 to the pod). Their color however suggests perhaps some heterogeneity -- bright banana yellow.

On the inside, super sweet pulp redolent of banana, mango, & sweet orange provides the basis for some fine flavor precursors. Seeds undergo a 5 to 6 day ferment cycle using wood boxes cut from the semi-hard yeneri shade tree & then solar dried for a few more.

Cyrila's, for a separate chocolate format, measured 40% butter count, excluding the remainder left in the "defatted cocoa cake" of approximately 10 to 20%, depending on the press. Texture of these Nibs indicates the higher end of the scale because they're so well padded. Either that or it lends more weight to the Criollo hypothesis, a genotype traditionally endowed with exquisitely soft butter.

Best of all, Abelina Cho roasts on a -- get this techno-North -- electric skillet for an unheard-of 4 hours at 200ºF!

Pardon the pun but her 'skill-set' -- gleaned first thru the visual inspection noted in the Appearance & next in the Taste -- rises to a level that puts many a barsmith in the West to shame who utilize tailor-made drum roasters, some costing six figures.

She keeps this up & it might just vault her into the class of the best "skillers" on the planet: Cyrila the Skilla.

The net effect of this uncanny technique: hardly any bitterness whatsoever until the finishing draft, a tribute also to both genetics & exceedingly well-winnowed grains (obviously manual for machines usually leave behind a percent or two). Before that bitter entry, all's really gentle & conducive to soft chocolate as the fatty weight holds it off while the Texture rounds into all that toothsome flavor, bitter eventually included, which furnishes an offset reminder of what proceeded it.