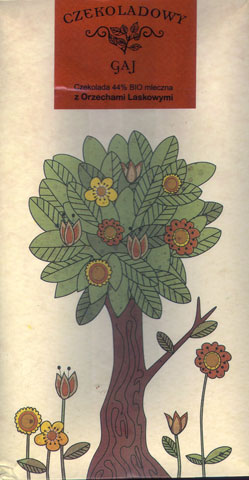 Impact
A progression of type.

Takes a sad seed (CCN-51) & makes it much better with progressive variations on it from the Dark 70% parent thru to Dark-Milk, then Milk Chocolate & finally this -- a flavored-bar with mighty inclusions.
Appearance   4.3 / 5

The total combine here tilts the Mleczna Milk Chocolate without nuts bar into a softer fusion of Taste (though not Texture) by just plopping whole filberts into the mix. Nuts further whitewash a compound already laden with copious cocoa butter & sugar, due in part to their un-roasted state, as Chris & Tom go for complementary elements rather than any contrastive ones.

In the very act of chewing (sorry, chocoisseurs, just letting it melt & swallowing whole nuts is inadvisable) this turns into a gianduia of sorts.

As such, core chocolate flavor loses out but the bar overall wins.