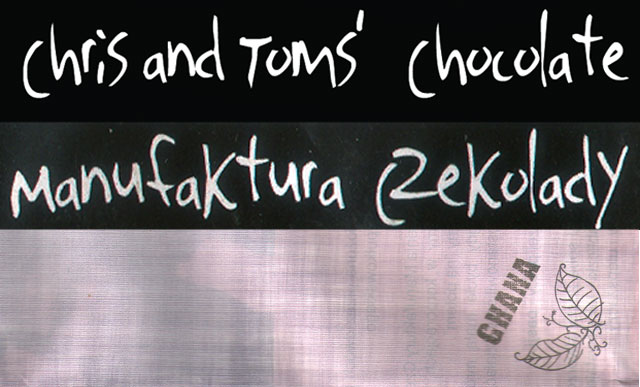 Impact
A bar to bridge a divide.

Poland, & Eastern Europe for that matter, has had little contact with sub-Sahara Africa. Until recently maybe some exchange students & that's about it.

Vice versa for Africans, let alone Ghanaians, with East Europeans... maybe with some technical advisors & that's about all.

Inhospitable climates & social environments have kept the two apart. The cold North versus the hot South. Plus some intolerance that works both ways.

The West is all too familiar with the Warsaw ghetto in which Jewish exiles found refuge from Russian pogroms. That densely populated quarter made Nazi roundups of them an easy shuttle to nearby ovens firing up inside concentration camps seared into the collective historical memory: Auschwitz, Birkenau, Treblinka.

If people of similar color can barely stand the sight of each other, imagine the gulf between black & white.

So this, a cocoa from Ghana crafted into chocolate in Poland. Just the very concept almost as rare as a Black Pole itself.

And yet the flavor is rather commonplace.

All of which underscores humanity's own internal similarities.

Chocolate has historically served the role as a medium of exchange between people on a variety of levels (social, economic, & even religious). This bar surmounts obstacles in that tradition.
Appearance   3.1 / 5

Aroma   8.2 / 10
West African cocoa?
Wood (typical), classic dirt (Earthen), & spices (OK, probably originated decades ago in São Tomé)
But peach brulée? Verging on florals?
Where's this coming from... South Africa with its King Protea plants (aka honeypot or sugar bush for its nectar)???
Mouthfeel   10.9 / 15
Flavor   42.7 / 50
opens up thru violet passages -> simple chocolate attached to a wooden splint -> tobacco -> low spice (vanilla + so-called 'grains of paradise' with their cardamom-inflected seeds) -> brulée in the Aroma translates into shea butter taste, then biscuit cream, & the peach tree into baobab pulp -> finishes off a power cocoa wash
Quality   15.5 / 20
Once more Chris & Tom's (C&T) turns out some of the more unique Textures around. This Ghana might top the category. A mouth of almost inspired lunacy; attributable largely to the grinding / conching technique as well as the butter hardness / quality from African cacáo, in an otherwise uninspiring chocolate.

As per flavor characteristics... to the lament of veterans such as Gary Guittard who decry that the classic Earth cacáo types continue to fade from the West African groves, this re-confirms his view on devolution.

Unlike many barsmiths who add butter back into the formulation, C&T ride only on sugar & cocoa mass so those cream tones in this chocolate are on the bean. Ditto the unusual (for this general region) florals (if only fleeting) at the opening (also spotted ever so briefly in Richart's Côte d'Ivoire).

A couple signs perhaps that Big Candy -- largely responsible for distributing & planting a new breed of cloned hybrids -- wants to make the move to fake Grand Cru in West Africa?