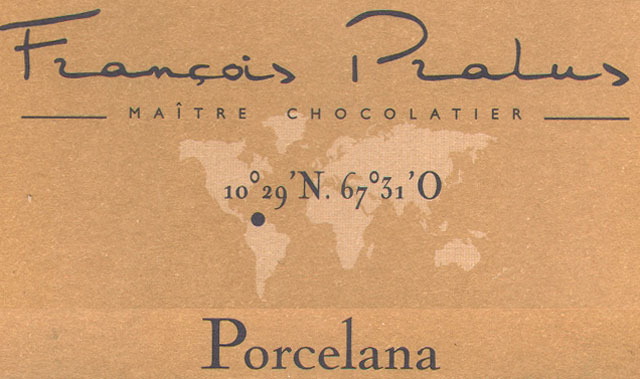 Impact
The pork belly of Porcelanas.

Presented as one of the Venezuelan Trinity (Chuao, Cuyagua & Porcelana) in a box-collection called Les Crus Prestige to set them apart from Pralus' Tropical Chocolate Pyramid (that an innumerable bar-stack from conceivably every origin on Earth).

No matter how it's packaged, this feels crushed under a pile of rocks that later forms a fire pit for a spit roast.

A pig. What should be rather rare ends up just another commodity on the mercantile exchange. People infatuated with chocolate-bacon combos should be enamored.
Appearance   4.7 / 5

Aroma   7 / 10
peculiarly dry & dusty: sand, hay & tobacco ash -> comes alive with a flint of spice albeit trapped in rubber 'n butter
Mouthfeel   11.8 / 15
Flavor   32.6 / 50
fleeting strawberry over chocolate & all's peaceful in the kingdom until... ashes come -> smoked ham tones to blackened pork bellies -> soot -> acid resurgence (acetic) -> what should be almonds or macadamia turns up peanut legume instead -> bizarre citrus-nut finished in lactic acid -> soil as it erodes away toward bitter-burnt cocoa
Quality   10.9 / 20
Misfires -- literally. A ghastly combination of fermentation issues, probable storage problems (now that the govt is thwarting cacáo exports) in a humid zone, plus a house-style counterindicated for the varietal.

Pralus travels far & wide sourcing cacáo from around the globe. No one covers as much territory nor, paradoxically, narrows down the range of flavors throughout such an extensive catalog.

As ever with Pralus, the balance of the bar rests on the roast. The degree to which he calibrates one from the other seems to be just that -- by a degree or two in temperature (Celsius versus Fahrenheit is negligible at these differentials).

Consequently, with so many origins in his portfolio, he tends to ignore the finer points in each individual one in order to impose a maker's mark on all of them.

In some cases it works wonders (the sturdier Corallo or the masculine Chuao). In delicate strains, such as Porcelana, it courts blunders.

Except for the opening fame in this bar, the notes play together poorly.

Either way, Pralus is Pralus & just one bite lets everyone know it.