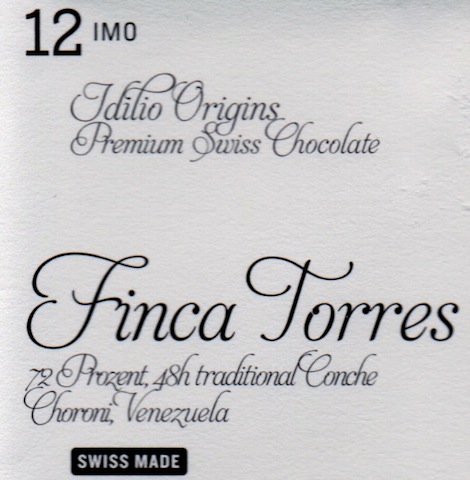 Impact
Hacienda Torres in Venezuela spreads out over 400 hectares or roughly 1,000 acres in all. Only about a fifth is covered however by some 12,000 Theobroma cacáo trees due to its mostly mountainous terrain within Pittier Nat’l Park. The park so named in 1937 after Swiss geographer / botanist Henry Pittier lobbied for a natural preserve to protect the enchanted landscape that cuts several micro-climates.

So here's a Swiss-made chocolate to echo back beautifully thru the valleys & springs.

Danger looms ahead however. The proprietor -- the Fuentes family -- constructed a batea for easier vehicular access to the hacienda grounds. This eases the transport of cacáo for both the domestic & export markets. What seemed an infrastructure improvement has inadvertently undermined cacáo’s future here by encouraging tourists & all the development which follows in their wake to cater to them – hotels, restaurants, entertainment complexes, et. al. -- that together encroaches upon the remaining forest.

The changes coincide with the generally shifting fortunes of cacáo all around the region. Of the 3 dozen or so cacáo haciendas in the Choroni district a century ago, only a half-dozen or so remain. The rest whittled down & gone, while some converted to resorts for the tourist trade in an area of prized varietals boasting significant Criollo lineage... a disturbing pattern to a vanishing legacy.

Yet one more reason to get your hands on this bar… as if great flavor alone weren’t enough. 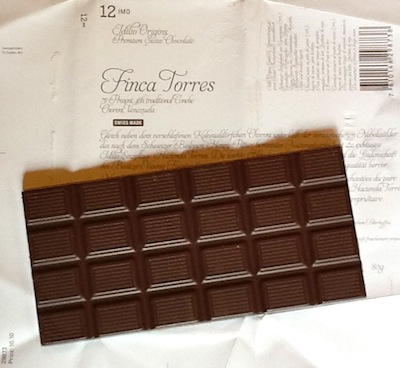 Aroma   8.9 / 10
take the blindfold test & guess: a chocolate bar or a cigar blunt?
inhale a lungful of lite-tobac Cumana from rural Venezuela where locals pop the lit end into their mouth!.... a custom believed to have started when the women skilled at rolling them tried to avoid getting ashes on their clothes
alternatively, just request an ashtray, a cigar cutter, a blue-tip match, + some long-aged rum for this easy-smoked taste sparked with suppling chocolate
uncanny; with a bowl of almonds too
Mouthfeel   12.7 / 15
Flavor   47.5 / 50
chocolate with a juicy red spot (papaya-pitanga) -> cream tones contribute a Milk Choc countenance, hence caramel -> fabric softener on cottonseed & flax -> black point, the lone small bite mark, on charred fig turns into a swirling derv of a spice roll (sassafras / frangipani / tonka) -> cocoa butter melt-thru accentuates the cream... rising to flood levels... carrying hay / grains / breadfruit toward a delicate gingerbread -> white fruit (guarana & monkey pod juice) -> parting shot: almond & palm frond -> puffs out on the Aromatic cigar
Quality   18.2 / 20
Another Felchlin production on behalf of Idilio. Taking care of business & keeping faith with the seed by respecting it.

So self-assured & comfortable in its own flavor. Despite the manifold descriptors from dairy to fruits, nuts & spices, the consistency -- both in terms of quality & composition -- which this bar maintains underscores a monorail of baseline cocoa that engages throughout the length.

For those alpha-tasters who pontificate on this nectar of the gods with a wish, a hope & a prayer to discern the slightest "hints" (to use a term on the List of Banned Words) of 'whatever' when none are needed because all of it is way too subtle & languid for applying tags like 'acid' & 'bitter'.

In response to how he'd describe the Flavor Profile of Finca Torres during a recent conversation, Idilio co-chair Klaus Blumer hesitates, "well, it tastes of..." before saying, "chocolate".

"Jah, I like that. And it's exactly that. It has lots of smart chocolate personality" (laughter).

Idilio & Klaus make their name off select Venezuelan cultivars only, & in a very assiduous manner. The venture takes pride in drilling down with a substantial degree of specificity into one country rather than scrambling all across the globe to release untold numbers of bars from every known origin.

As such, an otherwise commodity becomes collectible in his hands.

Each one singular enough to merit an autograph, signed by the maker. 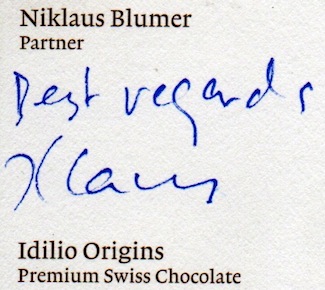