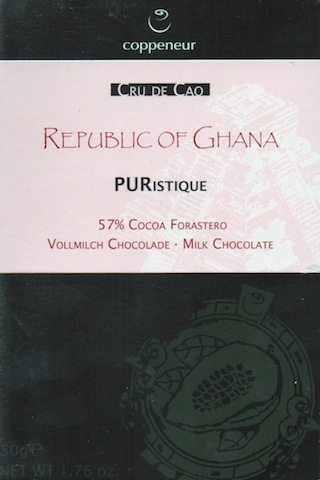 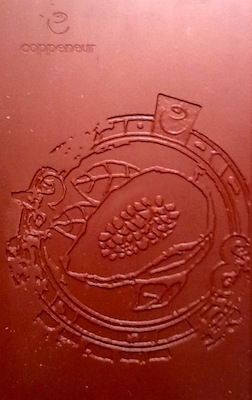 Aroma   9.1 / 10
clean cream lines & clear cocoa butter expressed for somewhat of a rarity in a Dark-Milk: redolent White Chocolate mousse -> light caramel brushing
Mouthfeel   12.7 / 15
Flavor   33.4 / 50
starts life really sweet, kid sweet / candy sweet: Sugar Babies™ & Tootsie Roll™ -> gets a little dirty... as the cocoa catches up to the dairy 'n sugar to reveal malted-chalk counterpoised against butter-caramel of some super hi-def (despite the now metallic offset from the dirt / chalk) -> malingering caulk the aftermath
Quality   12.2 / 20
Coppeneur, no stranger to the Dark-Milk category, has released a half dozen or more in recent years, including the vaunted Tabuna from PNG.

Ghana Vollmilch replaces Uba Budo sourced in São Tomé in the company's revamped line-up. The association between this & that extends beyond the fact that both are West African in origin. The tiny island of São Tomé once provided the seedlings & trees that formed the foundation for all of West Africa's cacáo groves that now dominate world cocoa production with up to 70% of the global commodity market.

If Ghana Vollmilch be the lactating companion to Coppeneur's Ghana Dark (the base couverture employed for this bar), the bond is reinforced in their both sharing the trait of steady, unadorned delivery. Pretty constant once they hit mid-stride. And while that midpoint here features a superb full-throttle butter-caramel (rich & creamy), the finish collapses under the spectral of terrifying off-notes. Nothing in the Ghana Dark suggests as much so the culprit lies in tainted milk powder or some rancid vanilla.

Either way it spoils a sensationalized beginning & middle, & leaves all that sumptuous White Chocolate in the Aroma unrealized with a girding underside that will alienate most Milk Choc fans, while the early onset dairy-caramel won't play well with Darksiders.

Enough to make everyone upset.