Impact
REDUX REVIEW: The following review details 2 bars from Chiapas, Mexico, an early release in 2013, followed by another in 2016. Overall rating & metrics (upper right) reflect the updated version only.

Good God, Bar au Chocolat of Manhattan Beach, CA rides in Godiva-style on a rocking-horse pony while doing yoga with a lotus heart (click image upper right to enlarge). Must've just returned from south of the border where she encountered one of the best-known spooks in Mesoamerican lore -- an attractive woman maddening the men to give in to her lures (known in Yucatec as the xtabay 'female ensnarer'). Armed with new wares & seductive powers, she aspires to Goddess Xochiquetzal status.

Xochiquetzal the mother of the feathered serpent god – Quetzalcoatl aka The Gardener of paradise. He secretly smuggled cacao, a food once reserved exclusively for the gods, & delivered some to humanity with instructions on how to cultivate it. Out of love for people, Quetzalcoatl betrayed his fellow deities. When the gods saw how happy the people are on cacáo, they became envious. They swore vengeance on Quetzalcoatl & banished him. To punish humans, they transformed cacáo trees into thorny mesquite bushes, & Quetzalcoatl’s last seeds flourished only in remote Tabasco, in the southeast section of Mexico. 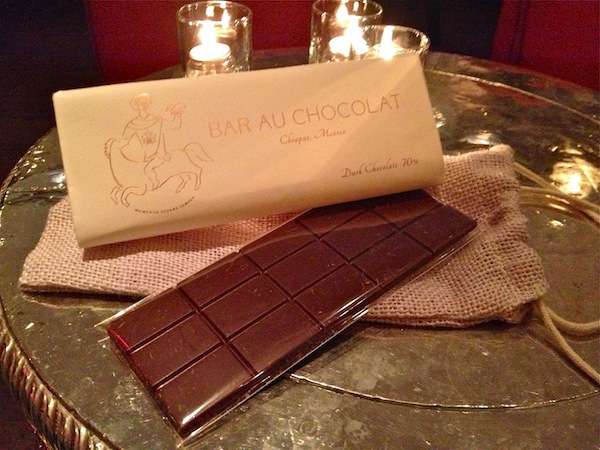 Looks like someone put some thought into this... decorative aesthetic, art-directed to the nth degree of detail... suitable for a wedding favor or, in the old days, the whole dowry, fabric jewel-sack included (photo courtesy of Jane Webb)

Aroma   7.1 / 10
2013
the only one of 99 latex luftballoons... filled with malted grains surrounding a plump raisin... to fall back to Earth... on bluestone
exudes fine leather & tobacco; jute too
aerates citric cocoa butter

2016
citricization & eucalyptic vapors -> grass, vines, fronds, & bromeliads commingle up -> jicama -> gradually & continually evolves, via the jasmining Queashuva flower, toward chocolate-orange -> agave stemwinder -> dry finish
Quality   17.8 / 20
2013
Very Mex, as in Nuevo Mexico -- lots of hybrid mutts in the mix. A tricky origin, one that fledgling barsmiths would be wise to avoid. Follows the bristling paths of cacti traits found in other bars from this area -- particularly Morin's Xoconusco Real or moreover the various so-called Mexican Porcelanas (Bonnat's; Coppeneur's; & Marcolini). That Bar au Chocolat (B-au-C) manages to smooth the contours of the spikes & jags along the way... is no mean feat for a Mex choc, even one such as this from a single-family plot.

Still, in a word, unbalanced; compromised by both a suspect seed selection (decent fermentation though) & pusillanimous processing parameters (that may be congruent with this brand's image but ill-suited for the genotype).

Few of them know much about chocolate, & even less about good chocolate. So great flavor takes a back seat. It usually escapes them. To their credit, some persevere to eventually produce respectable bar craft.

This label clearly has major ambitions. If the contents ever approach the highly stylized rustic-elegance in presentation, then B-au-C will stand for big bang & buck.

2016
A couple years on & Nicole Trutaxich of B-au-C knows these seeds like her own garden-picked recipe. Among the most adoring Mex bars available. Just caresses & massages those ragged / jagged contours of yore into kindness. Vibrance intact & still sharp (unlike other highly rated Mexs which rely on subdued Criollo-like flavor points to score) but controlled & aligned. In the process she eradicates the bitterness that plagued earlier versions.