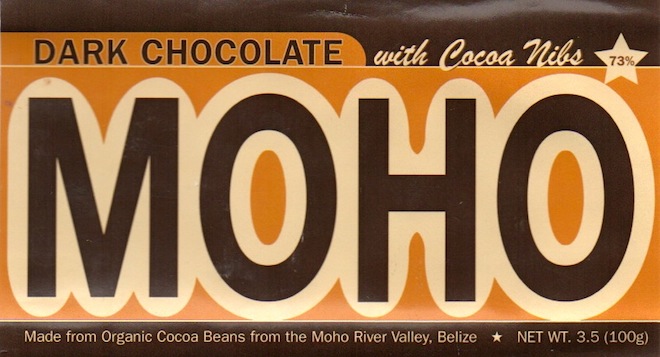 Impact
Moho Chocolate taps the hillside preserves of Maya Mountain Cacáo for this smooth grinder. Under the monitoring eyes of ace cacáo hunter Emily Stone, the label tends to a quasi-sacred redoubt of Criollos, much-studied by the French organization CIRAD (La Recherche Agronomique Pour le Dévloppement) for both their historical & sensory treasures that likely add up to heirloom quality.

From there, CEO Jeff Pzena, who also heads up nearby Cotton Tree Lodge, runs an advanced distribution system so that chocomanes in North America can savor their produce.

Due to undeveloped infrastructure in the "fine chocolate" world, 3 or 4 times a year Jeff mules a few cases of his bars onboard commercial flights, taking up his carry-on luggage allowance. It helps re-connect him to the area's Mayan roots as a modern-day pochteca (or cacáo merchant). Centuries ago they hauled goods around on their backs, overland, walking up & down the high-valleys deep inside the continent where Mayans lived, separated by ruggedly precipitous ravines & mountain ranges scaling 12,000 feet in altitude, along steep slippery paths, some cut into crags, others crossing rope bridges to ford gorges where one misstep meant death. Those couriers were basically the FedEx of their day -- when it absolutely positively had to be there.

And this is how the current premium chocolate industry inches forward: one knapsack at a time, on the backs of those willing to deliver.

Aroma   8.6 / 10
a ticking fruit-bomb? hanging on a branch in a jute sack, still fermenting & dripping juice with that only-from-Belize Bubble-Yum® set to pop
Mouthfeel   12.2 / 15
Flavor   43.3 / 50
chicle opening on Grape Bubble Yum® & Cherry Skittles® -> blank breadfruit -> a lone nut (cashew) -> light twigs -> re-ignites interest with toffee crunch & allspice (as Nibs work their way thru), then cherry cordial tipped in rum -> some dried, gently tannic cocoa-woods on the exit
Quality   14.9 / 20
Pop chocolate, wobbling for balance ala a gangly teenager on the prom floor. Fun stuff with a Texture to match.

Little ballast as the fruit flush pairs off against mostly vacant butter. Only at the very tail when Nibs make their full presence felt with some chocolate mettle does this take on better proportion.

Despite the hefty 100-gram mould, the imposing look of the Nibs tossed into it, & the sound of 73% cacáo cracking, the bar feels underweight, taste-wise, on the tongue; closer to a Semi-Dark in the upper 60s. For instance, Moho's 67% with Nibs which, except for the different vintage, inexplicably shows greater range & depth. As if a combination of the crop & the formulation got criss-crossed.

Either way, it all goes to just how benign Belize cacáo really is. This barsmith can easily jettison some of the added cocoa butter, increase the mass, deep roast the Nibs, & release an 80% whiplash. Moho River Valley, after alll, the home of Cyrila's banana splitter of a chocolate bar stuffed with fruitcake.