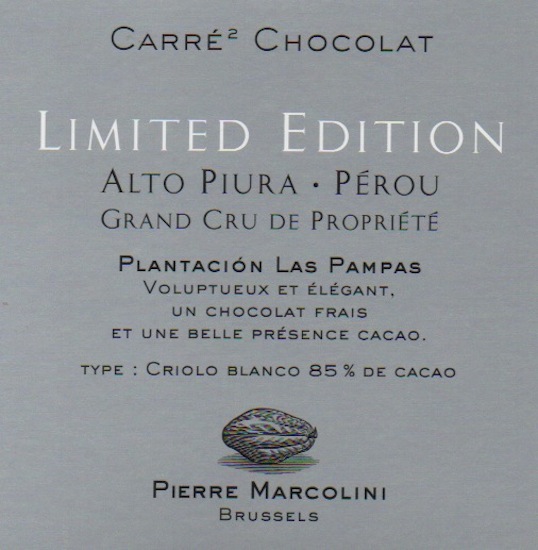 With regret & sorrow, please accept this apology for having to follow a brutally sweet act in Patric's 67% Piura on the C-spot's® Daily Review calendar. Yes, life can be unfair, even cruel.

Take heart though: after Patric's polished elegance, just about any other Piura comes off a drunken sailor in a dark alley brandishing a broken beer bottle.

As luck would have it, your number came up next.

Maybe going on that chocolate junket where just about everybody & their cocoa-allergic canines ventured to Peru turned out ill-fated. Ya know, the syndicate of cocoa-gurus flying in under the banner of direct intervention who, to their credit, advocate premium pricing but inadvertently confine cacáo growers to their farm-ghettos via high yields / high productivity that flood the market with a glut, thereby perpetuating wicked cycles of boom 'n bust. Yes, yes, scale & volume... the only way from rags to riches -- or at least survival -- in a global economy which values it as cheap fodder for candy bars, cupcakes & chocolate-flavored soft drinks.

Under the circumstances, however, you acquit yourself well. But there's just no way getting around it.

Should thee compare to a summer's day? No.
To a skittles party instead? No.
The devil's in charge... a dirt bucket? No.
Hot as a chili pepper volcano? No.

Just a humble, even impoverished, Piura.

Thank you for your understanding.
Appearance   3.2 / 5

Aroma   8 / 10
a long time since the last sighting of The VOG (Vanilla Oak Giant)... &, temptingly, a good amount of timber over spice
plantain & brown rice polishings
lone berry beneath
Mouthfeel   13.3 / 15
Flavor   42.1 / 50
as expected, a caramel opener under the influence of vanilla -> sodium back (naturally occurring mineralization) -> an ironically light magnesium / iron bitter (well enough controlled) -> sugar-sweet tip at the very forefront -> slight vegemite-vinegar 'vurp' (vomit / burp) -> starts blanking out as cocoa butter & blanco cacáo close the session but not before sweet plantain appears -> chanterelle post-script
Quality   15.7 / 20
85% recalls another Marcolini bar -- Fleur de Cacao, which should really be named Buerre de Cacáo (for cocoa butter). Like that one, this packs a lot of butter. It also racks up the highest overall cacáo-content for any chocolate from Piura to date.

The difference between Marcolini & Patric's Piura amounts to more than just swapping sugar for butter.

Predominantly white cacáo seeds puts this more in league with Amedei's. As with Amedei, Marcolini employs vanilla to good results.

Vanilla clearly a big boost in imparting core chocolate flavor at the outset. But its effects wear off relatively early on to expose a Piura in need, truthfully, of more sugaring (& a cleaner ferment).

While palatable, it lacks the equipoise & thus a far cry from Rózsavölgyi similarly weighted SdL, which further undermines claims about these Blanco seeds from Piura being Criollo.

And yet even as the bar randomizes some when the vanilla fades at the midsection, meandering into a quasi-mushroom / móle sense of both minerals & vegetables, its umami nature holds it from breaking apart into sheer decoherence.