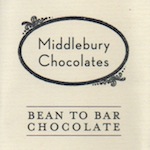 Impact
REDUX REVIEW The following summarizes Middlebury Chocolates' Flavored releases that fill the slot between a bar & a bombone (the shape of the former & usually the taste of the latter). In the Flavor Section below, individual bars are listed with a brief synopsis & rating of each. Middlebury sent a new 2015 release which appears first in that section: The VerMonty -- wood-roasted, sweetened / flavored with maple + a splash of coffee -- definitely a homestand. The general rating (at the upper right) reflects their composite average.
Appearance   3.9 / 5
plain mould scored into 3x4 tiles
Aroma   7.9 / 10
pretty individuated depending on the bar
Mouthfeel   11.7 / 15
Flavor   42.9 / 50
VerMonty 2015 -- 62% Dark-Milk
hy(per)genic mold of good color tone & temper
intensely smoky aroma in a wood chip & cigarette way… evokes a gastropub aura full of single-barrel bourbons pouring peat everywhere + a pot of coffee brewing in the back
past the lips it tastes of sweet smoke (perhaps a first in the annals) -> raisin -> maple -> cider 'n beer, yeast & the pub works really take on from there including a tiny wurst at the rear -> festive spiced-pecan clearing -> coffee, so well tucked in the fold -- only emerges significantly in the aft-linger
ING: cocoa mass, Vermont maple sugar, cane sugar, cocoa butter, whole dry milk, coffee, sea salt
RATING: 8.74

Habañero -- stunningly warm & antique oak scent presages salted caramel on the tongue, then some maple goodness sweetening a kindling pepper at the back... never raging though never shy either... as much flavor as heat, especially since abundant butter cools whatever flames threaten to get out of control; a masterful production of thermo-chocodynamics on the edge; 8.61

The Red Bar -- fireworks blow the wrapper off... gunpowder, smoke trails & flintstone in what Middlebury labels a "77% > sweet > sour > salty > bitter > spicy"; all true axcept it forgot 'sapid' as the tongue shines up antique fruit into a mini-móle driven initially by anise to a treacly-molasses warmed by mulling spices braided together in chocolate (actual ingredients: cocoa mass, palm sugar, cocoa butter, achiote, hibiscus, allspice, aji chili, black salt, anise, vanilla, clove); flash flame only at the very tail (thanks to the aji &, to a lesser degree, clove); a cupboard in a mouth, including a worthy young-bourbon nightcap; 8.22

Vanilla Bean -- pure candy-porn for lil kiddies… the Tahitian variety of vanilla (tends toward fruit more than the Madagascan bourbon type, presented here with a caramelized-maple top on the scent) which translates to outstanding caramelization + orchid integration on the tongue, the latter expands quite heady with sticking power from a rather gummy Texture even as it breakdowns into a molasses-fruit paste before pounding home into a dark cake with sea salt… an unusually good bitter-butter toffee seals it; arguably Middlebury's best bar to date in any category (Flavored or unflavored), as all components sit well together; 8.49

Dark Maple -- gets the sugars on... dry Texture leads to a sticky tractor pull on the teeth but the tongue wags in merriment as MIddlebury's house base saps it up against this tree sugar; palm sugar then joins the party & cleans up with caramel overtones; 8.01
Quality   14.8 / 20
Flavor additives give a boost to Middlebury's underlying bar work & provide a bridge til it can abandon them for purer chocolate that can stand up without the need for any.

Elite chocolate, after all, optimally sourced & crafted contains manifold flavor compounds that make it the greatest edible on Earth.

Unfortunately the mass market -- raised on Cocoa Puffs®, cupcakes, & chocolate milk -- has yet to wake up to this reality.