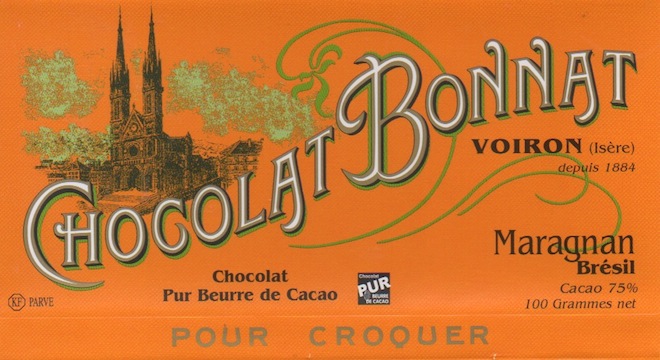 Impact
A bar very close to the heart of Stéphane Bonnat himself, with a rich backstory.

Back in 2010 he & the C-spot® discussed a fabled cacáo which his Dad crafted into chocolate in the 1970s, a bar so redolent with perfumes that it shaped seminal associations of Stéphane's own childhood memories of chocolate.

To confuse matters further (cacáo lends itself to such entanglements), there's also Maranhão (pronounced... you guessed it) of Brazil.

Research unearthed the following that frames of sort of 'who-done-it' in chocolate:

In 1760 French geographer Jaques Nicolas Bellin draws a map of the Maranon/Amazonas rivers under the name "Carte du Cours du Maragnon ou de la Grande Rivière des Amazones" so the French spelling of Maragnon is likely to come from this.

Maranhão is Portuguese for the French Maragnon & Spanish Marañón.

The State of Maranhão in modern Brazil was invaded by the French who established a fort at São Luís (capital of Maranhão) after which the Portuguese colonists would expel them by 1615.

William Dickinson writes in Universal Commerce, or, The Commerce of All the Mercantile Cities & Towns of the World (London, 1818) that Maragnon cocoa was an export from Lisbon, Portugal -- which makes sense in that it probably derived from Brazil -- a Portuguese colony until right around then (Brazil gained independence a few years later).

Another author states that there were 3 qualities of cocoa coming from South America: Trinidad (presumably the town in Bolivia & not the Caribbean island), Maragnon, & Bahia cocoa, with Trinidad being the best & Bahia the least (Food & Its Adulterations for the Years 1851 to 1854 Inclusive, by Arthur Hill Hassall [1855]).


A 'rose is is rose is a rose' so Maranhão / Marañón / Maragnon seems generally to be a term for cacao which originated in the Amazon basin that was clearly distinct from the more common-tasting coastal Bahia cacáo. Given that cacáo is probably not indigenous to the Mata Atlântica of coastal Brazil, it had to be introduced from elsewhere. (For more on the 'when' & 'where', see the Brazil section of the C-spot's® Chocolate Atlas).

In any event, Stéphane Bonnat believes he has come across this Maragnon by fortuitous circumstance. An isolated tract of land at a relatively high altitude (870 meters), an elevation that helps protect cacáo from disease. In this particular case, the dreaded witches broom (Crinipellis perniciosa), a fungus which swept thru Brazil during the late 20th century & crippled its fields. At that perch, Bonnat's partners harvest 2 kinds of pods: liso ("smooth" skinned) & rugoso ("warty").

He feels it might just be a descendant of the same hi-flavor cacáo that his Father shepherded but sourced back then from a broker residing along the Venezuela-Brazil border area.... adding yet another layer to the mystery.

Aroma   8.4 / 10
unique as Juliana, only in a different way
unprecedented levels of clean bluestone with palm fronds growing out taller than any weeds between the cracks in the cement
eventually goes cocoa, plus a little pitanga in the upper story
Mouthfeel   12.3 / 15
Flavor   45.5 / 50
brownie pavement of cocoa stone -> backed in figish bay leaf + spikenard -> more teasing spices gently unfold (allspice, fennel, kola & sassafras) -> gorgeous golden dried-goosberry in candied-gingerbread (indelible.... the kind of flavor that can follow a youth thru adulthood & their entire life) with tonka (especially its hay thread) & the grassy resin of pitanga -> breadfruit -> spiced cashew & paradise nuts -> plunges away stoned-chocolate
Quality   17.7 / 20
100-grams scored into tiny little chocolate cinder blocks. Beautiful bluestone (the probable result of slightly sub-optimum ferment; ditto the late astringency). Each one crushes the tongue with tenderness. None more stunning & riveting than that mid-palate.

Bonnat gently massages the conche on this to compensate for his customary house roast (warm, though shy of torrified, evidenced by those opening bronwies).

Among the most dextrous & nimble Brazilians to date, an origin which typically coneys more forceful flavors (excluding the exceptions like the albino mutant Catongo). Quite the companion piece to Bonnat's other recent release from here -- Juliana.

Much has changed in the cacáo groves during the last 40+ years since Bonnat Sr. encountered Maragnan. Whether son Stéphane, the scion to this chocolate family dynasty, indeed recovered some heirloom's of his Father awaits further explorations on the chocolate trail. Judging by taste alone, if this comes anywhere close to that, then the Bonnats have been spicing up our lives for decades.