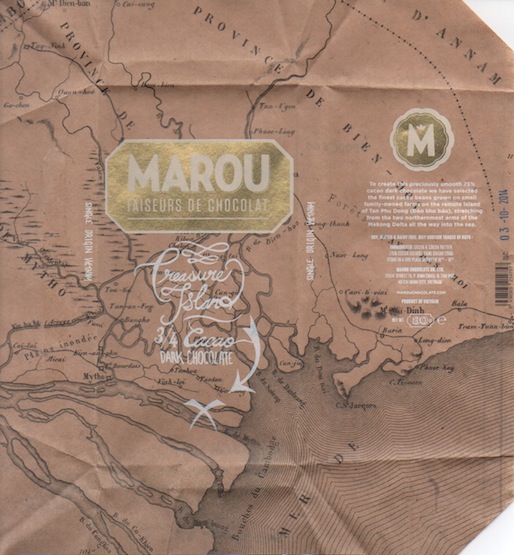 Jim Hawkins & Squire Trelawney live on in the guise of Sam Maruta & Vincent Mourou (whose surnames form the portmanteau of Marou). As if the great ship Hispaniola were re-christened Indochine by them, & sets sail for the Mekong Delta instead of the Caribbean.

Together they comb this Treasure Island for "brown-gold" that melts into a Pleasure Hydrant.

And whoever gains a purchase on this becomes their own Billy Bones.
Appearance   4.4 / 5

Aroma   8.6 / 10
though identifiably Vietnamese, it adheres as Marou's own signature fragrance since no other bar out there arrives so redolent:
ridiculous spice-orient underscored in yeast & hops -> ballons into a rather novel 'malted leather'
Mouthfeel   12.3 / 15
Flavor   45 / 50
flash chocolate rapids -> bites down into cocoa dust with a halo of white fruit blossoms (durian / longan) -> germinates soft spice which metastasizes to an intriguing tonka bean & opium (replacing Capt. Flint's rum) -> interlocking banana-breadfruit & cinnamon-sandalwood (sensational) -> cashew -> salt marsh after-finish
Quality   16.1 / 20
Neither any mutiny nor acidic intensity on this bounty as all the crew mates paddle along swimmingly.

Marou abandons lecithin in this bar. Texture though still a bit bouncy / rubbery largely on account of crafting in humid tropical climes that necessitates thicker pours & copious butter (at least up to this point).

Basically Benoit Nihant's Fèves de Tonka sans the additive (unless, of course, Marou operates a stealth… oh, skip it). So what if it practically tastes faked, like some of their other bars. At a minimum it's 'genuine artificial'.

All trademark Viet & another wonderment from Marou.