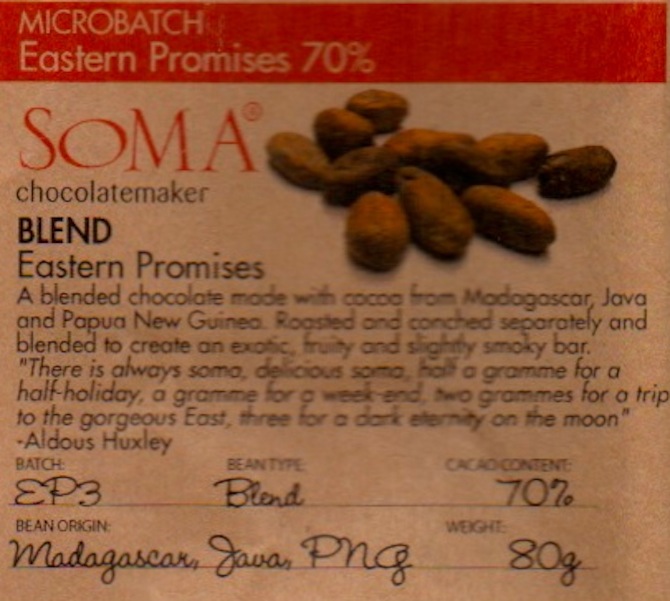 Impact
Might want to wear a gas mask. In fact, one should come with this bar as an accessory. Soma could charge more for it & customers would consider it a full-sensory VR experience.

Plus, on the ever brighter side, if a mushroom cloud drifted in with the whiff of chocolate, people would be less scared.
Appearance   4.4 / 5

A blend with all the trappings for a rooftop beehive party in a kind of freaky progression where the seams show thru drastically. Not since Amano's fire-trap named Morobe has such thick smoke inhalation / indigestion blocked the passageways.

The tang from Madagascar; breaded-chocolate compliments of Java; & that raging oil spill somewhere over PNG. Then again PNG & Java can be rather interchangeable so perhaps they swapped out for another here.

Either way, they almost integrate by the end to harmonize miraculously. Alas, the citrus & the gaseous clash continues to commingle in their aftermath. Practically tastes like a victim of the Great Chocolate Vault fire, which would be unfair to rate at all. Not the case though: it was never stored there but set aside on delivery for immediate sampling.

Perhaps Soma tried to pull a Solstice-type Wasatch to salvage some fraught cocoa by shading it in a blend. In spinning this mix it turns into a spider caught in its own web.