Impact
The first in a 4-part series on the Inaugural Collection of the Heirloom Cacao Preservation initiative (HCP).

Due to the C-spot's® involvement in the project, this chocolate is unrated.
Appearance   -- / 5

Aroma   -- / 10
sweet perfumes, rising almost to the level of a powder room

Fruit 'n Flowers -- the unmistakeable purple grape + a bouquet centered around acacia's white to yellow petals & calendula marigold (particularly its spice / hops scent) brown sugar
Mouthfeel   -- / 15
Flavor   -- / 50
sure enough… enters brown sugar against a soft but continuous basal cocoa counter -> bites down gingerly into more spice & soft earth -> raisin to sweeter dates, then calimyrna fig… sugar now really having its ways -> melts off on cocoa-cream puff -> Tawny Port in the aft-length with phantosmia hazelnut
Quality   -- / 20
A real fooler. Quite plain & unremarkable, even humble, in its Flavor proper. Then the tail fuses all the preceding tags to show this chocolate's full colors in a stemwinding recombinant fashion. Thus, this bar proves its mettle in the full measure of its entire length.

Neither a shred of bitterness nor much astringency (barely a grip at the final meltdown). Relatively high sugar content accounts for some of that, as well as the generalized mild-mannerisms of this hybrid whose genotype, which has been featured before in higher cacáo percentages, sits squarely in between Criollo, Amelonado & Upper Amazon germplasms. Indeed, this site called for Bolivian cacáos of 75% to 85% almost a decade ago because the origin warrants as much to display its optimal sweet-spot & nobler character.

Yet, in a sign of its prowess, it tolerates well both high & low sugaring.

A studied draw, for those hushed moments in life, to lean back, & drift off... whether in reverie or a nightcap romance. 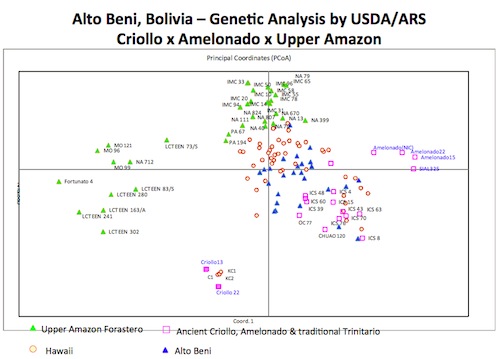