Impact
The second in a 4-part series on the Inaugural Collection of the Heirloom Cacao Preservation initiative (HCP).

Due to the C-spot's® involvement in the project, this chocolate is unrated.
Appearance   -- / 5

Aroma   -- / 10
another candied sugar plum fairy from the Heirloomers
then, huh?, stewed tomatoes? (heirloom tomatoes? trans-GMO hook-up?)
burlap
Mouthfeel   -- / 15
Flavor   -- / 50
chocolate honey flows over those Beniano Empress plums -> vanilla wafer (probable added cocoa butter contribution & an area to be addressed by HCP going forward) -> mounting stringency mimes a metallic lime (or what cocoa gurus euphemistically note as 'green banana') -> nut wood -> sweet spot (pomegranate) -> flourish of a finish as this recapitulates on ever more fruit borrowed from the beginning + the astringency washes up as alcohol (what some could liken to a young Scotch)
Quality   -- / 20
Archetypal Beniano from the Rio Bení basin in Bolivia seen in various guises starting with Felchlin's Cru Sauvage to Zokoko Tranquilidad & notable barsmiths in-between.

Part of Chocolate's Hall of Fame practically from the very beginning, documented at least as early as the 1500s by Fr. Francis Xavier Elder.

The honors for this cacáo were accepted on behalf of the forest-dwellers who wild harvest the pods by the outsized if not mythic figure of Volker Lehmann -- part Fitzcarraldo. part Indiana Jones, & all fierce -- the man responsible for coordinating the venture.

Again, as with the others in the Heirloom Collection, due to the rather hi-sugar frame, Flavor dissolves on the early side but neither suddenly nor entirely. No matter, this cacáo holds great staying power in fact as the outstanding finale attests. Some of that attributable to all the astringency caused by a likely under-ferment. So on balance, upping the sugar-count ameliorates issues with the post-harvest at the source.

An original & now modern heirloom. Genuine to its DNA.

A very sound designation of the HCP Sensory Panel. 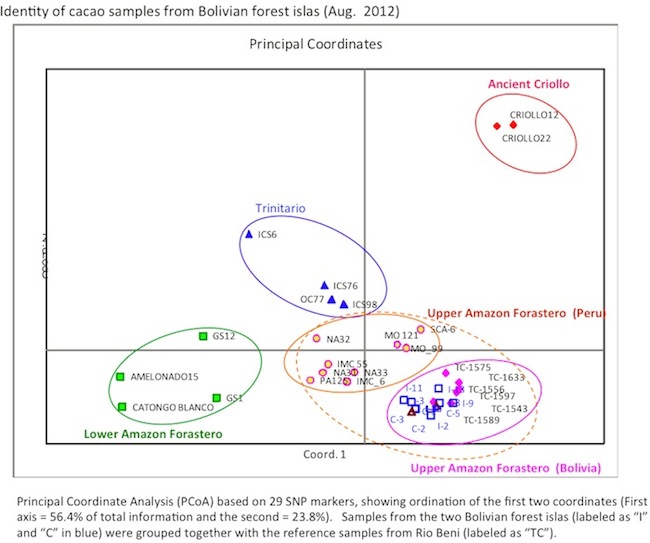