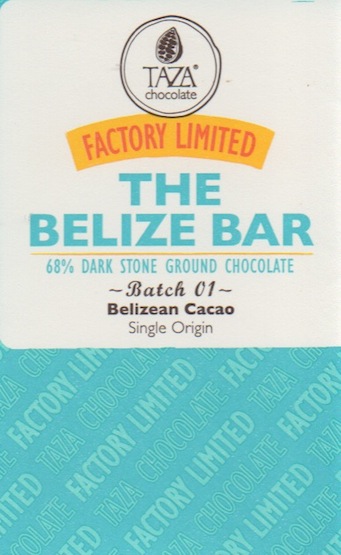 Impact
The Belize Bar…. the other baby of proud papa Alex Whitmore -- head grinder at Taza.

Wrapped in Crayola cerulean blue (ahhhh, how adorable) to reflect the Belizean sky reflected in the Caribbean Sea.

As Taza declares "you better Belize it". Hmmm, where'd that come from?

Well, Belize it or not, so well tempered & behaved. No night fits or growing pains.

Should grow up a real sweet monster.

Aroma   6.9 / 10
out of the water, head north on the beach, hook a left into the woods &, huh, a marsh replete with a li'l skunk-funk + some coal tar
Mouthfeel   12 / 15
Flavor   45.6 / 50
rolls up caramellow -> gibberish fruit thang (Gerbers® Tropical) chased by straight sugar -> catalyzes a fruit bang (grape) -> fig newton but with raisin instead -> runs away on a strand of fruit leather paste (mango-sapote)
Quality   17.8 / 20
The pride & joy of Alex Whitmore / Taza -- one of the investment & managing partners in MMC (Maya Mountain Cacao), the collectors / post-harvest handlers of this cacáo in the Toledo District of Belize. Beyond personal sourcing or direct trade, this represents a quasi-vertical integration similar to Vestri & Prieto in the D.R., or Pralus on Nosy Bé, Madagascar. Quasi because the production splits between 2 separate locations quite remote from each other.

Taza could never be accused of abuse like spanking & beating down chocolate batches into a demoralized pulp. Or, conversely, going neurotic, over weaning their bars with all sorts of gizmos such as vanilla games, no-more-tears lecithin & baby Mozart cocoa butter (oops, as with any anxious parent fretting over their young charge(s) keeping up with all the other kids on the block, Taza buys into Mozart here… well, little Wolfgang was pretty precocious too so that sounds fine).

In any event, no stern parenting here. Alex treats his babies the same as house plants: a little TLC & they're on their own from there. None of this stay at home 'til age 26 & riding on mommy & daddy's health coverage coattails. These bars leave the factory on the "green" side, underdeveloped in terms of roasting & refining, to suit their independence among New England Patriots where Taza resides. Requires just a little extra nurturing via the consumer-cum-nanny to start salivating glands going & then, bam, on its way...

A wee bit of a formless blob to start which, paradoxically, acquires ever-greater definition during the melt-down. Scampers about a little too exuberant with the sugar but oh, precious sweetie, koochie kookie koo. No doubt even its poop smells of fruit. Who dat sez shiz stinks?

Seeing how alive the rather unsuspended sugar particles energize this bar (thanks again to minimal refining / no conching), Taza could well afford to break the 70% threshold & still keep this at child's play (or adolescent at most).