Impact
One of the largest chocolate giants in the world tackles one of the smallest origins -- from the roots up.

A generation ago, Puratos introduced an internal line named Belcolade. Since then it has grown into a huge industry player. In 2012 Puratos signed a joint venture with Grand-Place to create Puratos Grand-Place Vietnam.

Lest the premium sector thinks this presents just another example of Big Chocolate encroaching on the artisanal niche… well, true enough but with a difference. Both CEO Eddy Van Bell & the Cocoa Group Manager Marie-Amélie Ormieres actually appreciate & understand flavor -- a facet the industry at large has lost track of.

Moreover, after conducting due diligence, they're developing projects in other renowned &/or historical destinations featuring native cacáos. All in a quest to both seize an opportunity & lend their considerable resources to revive cacáo's fortunes in some hard-pressed places.

Vietname presents an anomoly in that its cacáo trees are relatively young compared to other origins, most planted since Year 2000 onward & its groves intercropped with local fruits for a diverse income stream. This contrasts with the hard facts that plague chocolate globally: better prospects in even rubber & bananas, plus an aging population of cacáo trees & cacáo growers, threaten the sustainability models of the industry's revenues.

Except to hear &, better yet, taste the fruits of Belcolade's labor in the next year or two. 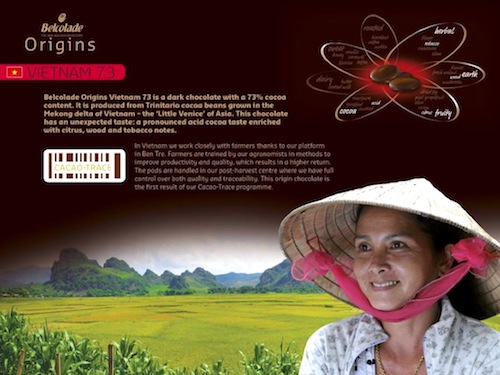 Envisioning a Bright Future: happy chocolate or looking happy to get out of it?
Appearance   3.1 / 5

Aroma   7.8 / 10
smoked pork (overfermented?) blows off in favor of warming spices (in character with this origin) -> cookie dough with friendly nuts to disorient toward Venezuela -> trees & leaves appear (latex + tea) -> finally diffuses rich cocoa plumage
could go either way: boom or bust
Mouthfeel   14 / 15
Flavor   41.2 / 50
5-leaf akebia a k a 'chocolate vine' for its scent of cocoa-vanilla (in line with this chocolate's predecessor -- Grand-Place 72%), followed by a direct chocolate hit (the Dông Nai influence), citric flirt (from Bến Tre) in & around it, overshadowed by a now-brownie shade -> mild dusty tannins flutter as faint sandalwood, with prior acidity, surround in a halo-formation -> tea in the Aroma translates into uncured tobacco leaf rolled around the tongue -> ambrette a k a rose mallow (rich, slight floral, & heavy musk-like with a tobacco-edge of its own) heralds a sweet rush to the finish on whites (cane, marang, + translucent longan) -> closes the lid with wood
Quality   15.4 / 20
As a business-to-business supplier, this sample presentation, developed for sales & marketing personnel, represents similarly to Grand-Place's trade couverture. Part of Belcolade's growing Origins portfolio, & parcel to efforts in Vietnam to increase production from around 20,000 hectares to 50,000 hectares by the year 2020.

A mix of Bến Tre & Dông Nai cacáos gathered at Belcolade's collection & fermentation center in Bến Tre itself, then shipped to Belgium facilities for processing. According to the company it follows a unique protocol which enhances flavors. Nothing too unusual in the taste however to suggest such, such as starter cultures to initiate the fermentation in an attempt to control & direct flavor outcome. The company instead relies on the 'tried 'n true' to control Vietnamese hybrid cacáo which tends toward the very acid, oft overpowering, in some micro-regions (Bến Tre among them). Solar drying then finishes the post-harvesting.

As expected from a company of such resources & experience, this bar is technically proficient. So much so it refines out just about every possible strident mark to produce a chocolate perceptually sweeter than its 27% sugar level & ameliorate a relatively high roasting curve. All of which curbs the complexity of a blend, especially one from Vietnam with its distinct regional variations.

Indeed, this bar only peripherally evokes Vietnam. By emphasizing Dông Nai over Bến Tre, it assures a mainstream basal cocoa contour at the expense of brighter fruit-laden conveyances.

As with Grand-Place Vietnam 72%, Belcolade could do well to reapportion the ratios, slightly increasing the Bến Tre contribution which would create some needed uplift in this rather planar profile.

Good nonetheless, such as it is.