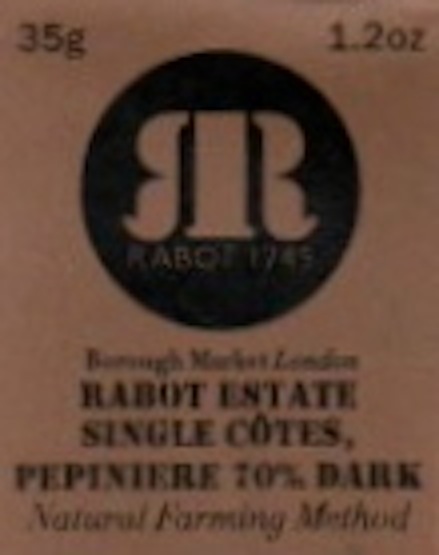 Impact
REDUX REVIEW -- below are segments of Hotel Chocolat's Pépinière, initially released in 2014, followed by a couple refreshes in 2015. The rating & metric to the right refer only to the last bar in the series.
*************************************
That guy blindfolded & on all fours in a central London park may not be some S&M client or terrorist victim (then again he might) but an experimental researcher putting his sense of smell to the test… attempting to emulate the sensory skills of a sniffer dog. As it turns out, all his investigations reveal that subtle scents can change mood, behavior & even major choices in life (such as the fragrance between lovers which first attract them).

And why is that, Hal-9000? Because brain scans show that although humans possess fewer receptors than other mammals, the human nose & brain are unusually well connected, with each group of receptors linking to many more neural regions compared to other animals. Possibly for the same reason, a dog’s sense of smell rates superior to a rat’s despite a third fewer receptors. That nostril-brain connection might equalize the disadvantages of sheer receptor numbers in the ability to process incoming scents.

The brain's olfactory centers are intimately linked to its limbic system… also involved in emotion, fear & memory. That suggests a link between smell & thought itself.

Think about that when the molasses-like triggers of this bar ooze their way around the neurons.

2015b
unique cross between Home Depot® & a locker room
Mouthfeel   13.2 / 15
Flavor   44 / 50
2014
quick papaya intermixed with sharp spice, then just as sharp wood -> cuts thru tamarind in a beat -> slides toward the marshmallowy slippery elm -> really dark treacle develops into molasses -> sticks it on black licorice… on & on… til a minor guava break-thru of sorts for a sweet 'n sour twist -> dry finish

The 2nd in Hotel Chocolat's emerging "Single Côte" series -- an exclusive reserve selection within the estate such as a planting row or block. After the inaugural release -- the stellar Marcial -- this pales or, given the Flavor Profile, shadows by comparison.

A much heavier countenance; almost no levity whatsoever despite roasted less than it tastes, due to this island's characteristic pyro lava-tar flow of a soil. Generally monotone… straight from the molasses plantation to brook comparisons to Duffy's molasses jar-in-a-bar (a British penchant perhaps).

Pépinière in French derives from pépin or 'fruit seed', as well as denotes, in agronomic terms, a plant nursery. The latter imparts the sense of jejune / under-development. This release awaits maturation in subsequent batches.

Another batch; even more issues: regression of type, diminution of flavor.

'3rd time the charm' overstates matters as this comes on more frontal, even blunt. But what a quantum leap: HC learning the curves from its previous 2 misfires. Indeed, this seems from the other side of the moon compared to those.

The profile clipped to be sure, confined into a much narrower range, smoothing all the edges on the contour. More gratifying nonetheless. Some shall bore themselves to stasis; more should value its depth, plunging any criticism(s) with it.

Tempered by a considerable half-hour roast which sacrifices a lot of tags like sublimating the volatiles & volcanic-molasses, then pampered for 70 hours of flavor development in the conche.

Hotel Choc finally nails it with this chocolate hammer. Whether thru blind luck or painstaking experiments. either way, the wait is worth it.