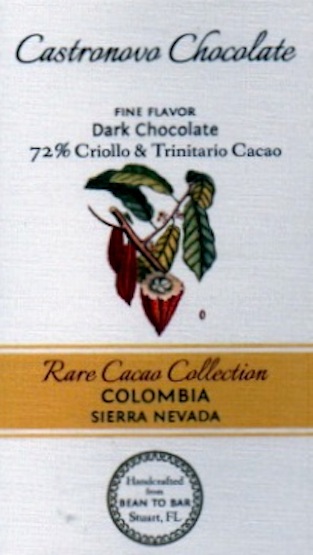 Impact
With this bar from the Caribbean side of Colombia, Denise Castrono moves about as a hammerhead shark from her coastal resort, almost due north, in Florida.

Hammerheads live in schools of more than 500. The strongest (a female) swims in the middle. When ready, she shakes her head from side-to-side to signal the others to drift off so she becomes the focal point.

Aroma   8.6 / 10
sniffing the dusty dirt trail for a campsite in the wilderness littered with mushrooms, orange pekoe tea leaves magnified with neroli, decaying mulch & buzzing insects
follow the smoke column...
unique
Mouthfeel   11.2 / 15
Flavor   45.9 / 50
stone-grounded cocoa amidst sweet granadilla -> caramel twisting around nuts -> the Aroma's aniseed -> dark sap -> smoked tobac -> marinated tamarillo juice, then dried apricot to dry citric (guava) -> cocoa dust around orange-blossom inflections
Quality   17.5 / 20
Rare in character. A bit rough hewn for sure, rather than ultra-refined; an acid trip except mild mannered in each & every one of its expressive nodes.

Castronovo relays that this cacáo, an admixture of cultivated & feral or even spontaneous types -- call it demi-wild -- & harvested by the local Arhuaco people, grows along the slopes of Colombia's Sierra Nevada coastal mountain range at approximately 6,000 feet / 1,800 meters. That would place it at record elevation for cacáo, well above Marañón Canyon in Peru or the Rwenzori Mountains of Congo which also host hi-altitude cacáo. So off the beaten path it requires a day-long journey to collect in jute sacks on the backs of mules.

To put into context, a valued C-spotter relates that La Sierra Nevada de Santa Marta encompasses a very vast territory of 3 different departments in NE Colombia -- starting on the Caribbean beach, stretching to perpetual snow caps in the mountains, with every single type of climate & soil in between (well, almost anyways). The residents range in equal diversity: campesinos from inland, colonials, & refugees fleeing conflict from other regions in the country where civil unrest still endures.

The indigenes themselves also comprise various ethnicities; not only Arhuacos, but Kogis, Wiwas, & Kankuamos.

In such remote isolation, cacáo types likewise vary. One general rule seems to apply however: the more wild, the more interesting the flavor. Yet even domesticated types often bear mid-level complexity or better.

The conundrum that operates elsewhere also exists here: subsistence growers tending to cacáo & coffee for socio-economic development as well as positive environmental impact hope to deliver their produce to specialty markets for a premium but often end up selling for any price they can get from the local giants -- Nacional (Santander) & Casa Luker. Thus any qualitative differentiation gets swept into the bulk dust bins.

Then again maybe it shall forever remain thus for the Arhuacos consider Sierra Nevada the heart of the world & believe the planet's well-being rests on it. Nature & society intertwine according to a cosmology whose universal law enshrines the origin of life & its evolution. As part of that overarching dynamic, people play a vital role in its equilibrium & preservation.

Why upset that with avaricious intent from others bent only on self-aggrandizement.

Indeed, the Arhuacos continue to resist Christian missionaries, the central gov't, guerrillas, & drug cartels in defense of their values. And what sometimes feels like a Hobson's choice similar to casino gambling on the American reservations, projects entailing infrastructure & agrotourism split the community between those who wish to retain their traditional ways versus those in favor of development. In these scenarios, modernity & money usually win the day.