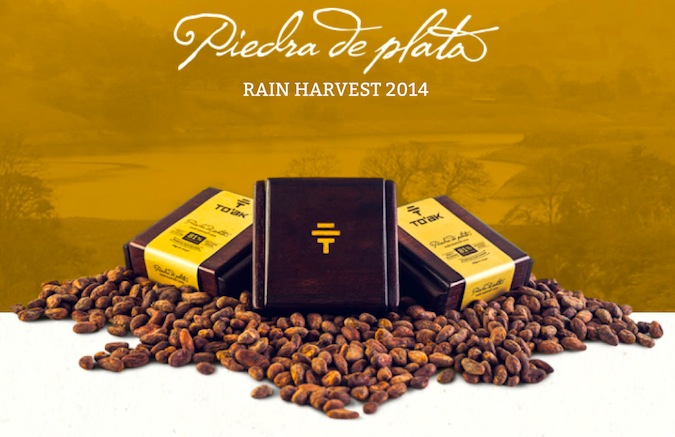 A family friend who repped the NBA once said in response to a player asking about his worth in a pending contract extension “you’re worth whatever you can negotiate”.

In negotiating the current market, the ambition here knows no bounds, nor audacity. The immersive website, the handcrafted slide-top box, & the enclosed tongs for handling the delicacy (nothing but the Spanish elm utilized for the fermentation cases shall come between chocolate ‘n tongue, in keeping with the terroir’s continuum) only partially inflates the US$260 per bar -- a price based on a strict calculus of labor manhours. Nothing too ostentatious either, like alba truffles or edible gold leaf, overshadows the centerpiece. Leaving the accessories out, this still weighs-in a hefty indulgence by chocolate standards.

Dylan sang, long after 'the times they are achangin', that ‘people are crazy / times are strange’.

Just a couple years back, in 2012, while on the keynote panel of a chocolate festival, the C-spot® challenged North America's best, arguably, barsmith to increase his benchmark to $25 only to be rebuffed by "the marketplace isn't ready for it". Well, as if To'ak sat in the audience, heard it & snickered "F that, I'll see you & raise you 10 fold'. And then some.

A great business model if one can attain it. They practice a rate structure opposite that of American Gangster Frank (think Denzel) Lucas who flooded the streets of Harlem with the purest quality heroin at the lowest price. His wild success proved so profitable that he had plenty to bribe gov’t officials as well as the majority of NYC’s narcotics division without whom he could never smooth the enterprise like jiffy lube.

Consider the sugar in this the impure cut & the extravagant tariff a nod to the disintermediated middlemen who would’ve stepped on it for a multi-fold increase had they been involved.

In the wider perspective, given the elaboration required to craft a sumptuous chocolate bar from bitter cacáo seeds, the amount pales next to a couple teaspoons of cavier or champagne bottle service at any club. A bargain in fact. For those advocating a livable wage & economic justice, figure that this all adds up to a lot less work for a lot more pay. As per the poor plebes who can ill-afford it, unlike Cable TV sports no cheap aromavision exists (yet) for chocolate so maybe a lottery-raffle can be thrown every batch for a 1 bar giveway to the disadvantaged.

Before shuttering its operations NōKA flirted with a $100 collection of thimble-sized chocolate ingots largely on the strength of the box itself (chrome). More recently Barsmiths™ Chocolate purveys $50 bars found few & far between in the chocolate underground.

This passes those & elevators straight on thru to the upper most levels.

In these rarefied confines & at these lofty heights, status usually counts most, followed sometimes by performance. This site only rarely -- verging on never -- gives any consideration to packaging or price or the extraneous; just part & parcel to focusing on the interior matters & the preeminent criteria: Qualia…. specifically of Flavor.

On that score, mere street dealers beware: To’ak is one tough negotiator. 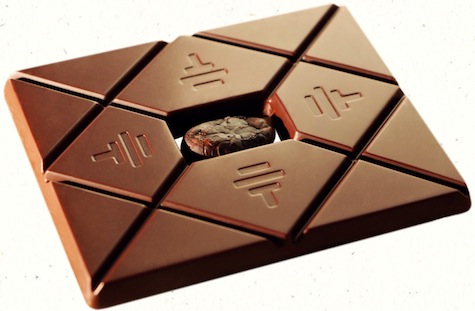 EDITOR’S NOTE: circa 2009, on a teleconference that led to the account of The New Nacional Guardsmen, the Pearson Project inquired about the goals of the C-spot®which were then stated as “being part of the first $100 bar”. Calculated in dollars per gram, the Pearson’s Fortunato No. 4 may or may not qualify. The larger point & objective to such a goal: that this forum promotes exhorbitant chocolate should be analyzed within the context that it’s not necessarily anathema if established for the right causes. Namely, genuine sustainability based on the principles set forth by Brundtland encompassing the 3-Es -- Economics, Environment & Engagement of local society – all of which this site has contemplated & written about extensively -- arguably unsurpassed for the premium segment -- ad nauseum in its various reviews, essays, newsletters, et.al., perhaps none more universally than the entry titled Can Chocolate Still Save the Rainforest…. Or Just the Planet?
Appearance   4.9 / 5
High Presentation of Chocolate at the Exhibition
Aroma   8 / 10
Seeds
incredibly light acetic acid + cleared woods (mahogany)

Rain Harvest 2015 Light
duplicates the Dark (above) except this feasts on yeast & emits a musty candied-flower apparition in addition to wood, fronds + a fruit swell

Rain Harvest 2017
76% cacáo-content
slight extra tart / sharp & more amplified than the year before (El Niño above)
Mouthfeel   10.7 / 15
Flavor   43.9 / 50
Seeds
TO'aK sorts these into 2 broad types: a) slightly plumper / heftier & rounder selection bearing greater Nacional morphology & b) a more russet-skinned tier of divers 'other' cacáo -- call it 'Mixed Hybrids' -- & far more redolent unhusked than the relatively absent aromas of the preceding 'a'. Both on average a bit underweight (less than 1 gram per 100 seeds), an attribute, partially, of their biosphere preserve environment.
On the tongue, the presumed Nacional-centric seeds touch off sweet & easy… yes, traditional banana-inflections found in just about all Nibs almost the world over + papaya that yield to savory elements (greens & truffles) with only mite bitterness (& thin at that) -> back brazil nut -> aft-taste of classic Arriba slate-chocolate / blackberry pip. Really well-behaved.
The Mixed Hybrids, on the other hand, grate the T-buds ('T' for Taste) & project a generalized tartar incrustation that begets a tuber chip -> fiber then wood sustains the length.
NOTE: TO'aK purposefully excludes the MIxed Hybrids from production in their bars & goes to considerable lengths to select & sort accordingly.

Rain Harvest 2015 Light
Bar
sweet spices escort some breaded fruit (dense moraberry) -> cinnamon Red-Hots®, the candied floral of the Aroma + a vanilla/inga-cocoa all roll up together -> sapote -> phosphorescences of banana-coffee

Presentation outstrips processing & data-gathering outpaces decision-making but, with such hype anticipating a letdown & after speaking with the principles of To'ak about their overall methods, this frankly fares better than expected.

A grownup percentage (81%) benefitted by weather in Píedra de Plata valley of Ecuador which proved drier than normal in March 2014; thus concentrating, theoretically, the sugar content of the pulp which ferments these cacáo seeds.

Despite the promised notes of berries & plums, precious little acidity materializes to manifest those fruits in any major degree, or even much astringency for, presumably, a Nacional rooted genotype. Just no real pucker to speak of. As such, only scant to nil traces of Arriba's fabled floral prints (orange blossom, jasmine, occasionally lilac), perhaps because the seeds underwent a ferment of up to a week, well beyond traditional Arriba Nac'l cycles of 2 to 3 days which create its characteristic stringent traits that seduce many into faked flowers.

Customary Nac'l tags though -- coffee / blackberry / nut -- clearly embedded within, & bitterness virtually absent though residual tannins stand in nicely. The latter contributed largely by elm. Yes, beyond the tongs to lift this on the tongue, elm imparts significant impact to the profile in a carryover from the fermentation cases themselves.

A moderate roast for an Ecuador, which conventionally handles stronger heat, counters Equatoriana's conch (the manufacturer for To'ak), a firm accustomed to churning a shade too aggressively which simultaneously throws off the Texture / Melt.

This finished chocolate pretty much encapsulated by the lone, lean seed accompanying the package (see photo under the 'Show More' link in the Impact Statement above) in a nice 'bean to bar' touch.

All in all, a respectable if incomplete result, one that Jerry Toth & Carl Schweizer of To'ak can nonetheless take pride in as they prepare for the next harvest. Earnest & dedicated, they stand committed to the mission -- both for cacáo & the rainforest as evidenced by their Third Millennium Alliance which established the Jama-Coque Eco-Reserve along the Pacific coast of Ecuador, a stretch more threatened than the Amazon as only 2%. still survives. This mirrors in some respects the demise of Brazil's Mata Atlântica across the continent which enjoys some reforestation thanks in part to a resurgence of cacáo cultivation.

They're aware of the obstacles & of their position among the constellation of barsmiths. Unlike a few early-stage peers who hang a chocolate shingle & wing it, To'ak carefully plots its course & this bar shows, literally, the fruits of their labor. Whether they make it or not largely depends on consumers willingness to buy at a feasible charge that could fluctuate before settling.

Whatever one thinks of the business model, hand it to them for audacity in daring to test a new revenue structure in contrast to the raft of consultants who dash around the globe at odds with themselves professing artisanal principles while advising cocoa plantings by the metric tonnage, processing equipment built for volume / scale, throughput spreadsheets, efficiencies, economies of scale… the whole MBA-wad which, granted, reflect the practical reality that at current market prices chocolate remains cheap fodder for mass production under the ideological rubric that more & more growth of whatever qualitative standard equals ‘better’.

As narrated in TO'aK's story-book which comes with this collectable box presentation, Dark literally connotes the fruits of cacáo picked during the early season (February 21 thru March 26, 2015), ripening only under moderate sunshine. These seeds definitely got wet though during the rain season. In response, the built-up acidity received a longer ferment cycle + a commensurate inverse conche -- a sub-Zotter-level 9 hours.

A midpoint merger on the palate between Duffy's 83% & the Brasstown 75%, all from the same general vicinity. A bit straitjacketed yet tremendous depth, especially that final stanza of deep purpling fruit.

TO'aK's most accomplished bar to date. Spreads then covers both vertical & horizontal axes, displaying fairly broad range rooted in some considerable depth for a chocolate of intensity without brutality.

Indeed the label demonstrates incremental advances on every link in the production chain (save for Texture, a slog endemic to Arriba-grown cacáo) from the seed selection to the box collection (if that's possible; was already tops). Hence, the bump-up in its rating from a year ago.

2020 Update: The 2016 and 2017 harvests -- allowed to mature as part of this nameplate's Aged Chocolate collection -- show To'ak hitting its stride. A label that produces quality with consistency.