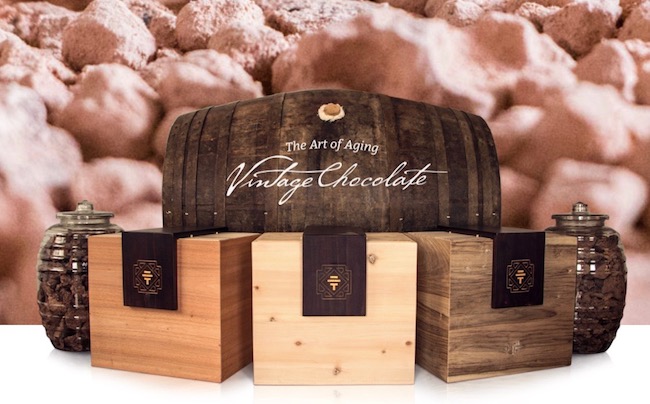 After collecting HCP Heirloom Designation IX, what could the world’s most expensive chocolate perform for an encore? Something more elaborate of course.

Aging chocolate. A subject of anecdotes & theories but no empirical data.

It coincided with this site's own aging program which went up, literally, in flames hot enough to dry every tear that loss caused.

Thankfully theirs came to fruition.

To'ak ventures far outside the lab to come back deeper into it. The company enrolls university science departments for tantamount to a multi-phase clinical trial. No expense, distance or patience spared in the experiments.

In generations to come, those still chronicling such matters should note: as Methuselah to humans, so To’ak to chocolate.

Single Malt Islay Cask
as if a direct pour from the barrel itself
a dank peat bog once flooded with marine now-residual micro-organisms (plankton, algae)...
... logs over time into a wooded substrate before sprouting a candied flower

Sauternes Cask
so subtle... the vape so enmeshed in the sound cocoa principle unlike others in the collection that hover above & around
a matrix of pear, peaches, vanilla &, of course, golden raisin

Tequila Cask
phantom of the chocolate
beyond subtle.... subliminal; tequila invisible -- instead pepino, cocoa & horsetail (the herb more than the animal) stand in for it

A short-sided 4-day ferment prevents the Spanish elm frame from renting & ripping the flavor chamber apart which 1 year of aging could only ameliorate nonetheless to a degree. As is, a forceful yet subtle exposition.

Below average climate conditions continued on into 2015 but above 2014 levels (see below) resulting in a sweeter vintage. Yet To'ak calibrates this at a sweeter level still -- 73%.

A Laphroaig cask, at the deep end of peat. This 'peat monster' imposes & then some. Positively / absolutely identifiable from the jump. Chocolate subtantially sublimated in the process & secondary to it. Higher cacáo-content &/or shorter curing would balance the components. Notwithstanding, as is, the profile more than hangs together, it harmonizes throughout so by the aft-entrails it drifts toward a deep tonic mead.

Quecus patraea (Limousin) is hard but looser grained than the more common America oak. Its porous nature allows for more tannins to interact, thus imparts add’l flavors, including its own cocoa analogues.

super sweet cocoa / brown fruit brigade (chocolate / tamarind / raisin) -> smoked latex at rear palette -> locks into a mealy compound... part veg fiber / part animal muscle... call it 'jerk-vegemite' paté (extremely rare, nothing like it in all of chocodom) -> fleeting cream-on-plantain alters with flickering oregano from the Aroma -> shutters up an inner ring of dried wood so thin to form an astringent veneer

Singular &, despite the above descriptors, subdued. A conventional framework at the beginning & then end. In between however... anything but.

Andean Alder (Alnus acuminata), a wild tree growing at mid-elevation in the Andes Mountains. Tannically rich. This bar emphasizes the 'wild' expression (nearly wildlife). But so unexpectedly unwooden save for the final frame. The middle procession thoroughly disorients & divorces from chocolate-flavor sense altogether. If not for the textural tether, this bar's midsection would fail a blindfold test. What it lacks in the way of enticements it makes up for by avoiding blandishments.

For the person who thinks they've tried it all.

Palo Santo
80.5% cacáo-content; 2015 Vintage; Aged 4 Years
Ever felt after inhaling essential oil of Palo Santo (the form most people encounter) like ingesting it? Well, here's the best way. Ahhh, in a carrier cocoa of 80.5%... the half-percent a phantom distillate of the sylvan spirit Palo Santo. And with plenty of overtones: spearmint leads the charge before sitting into mulling spices countering a welcome turpentine; the bar closes out almost as a Girl Scout™ mint-chocolate chip cookie doused in verbena. Fab unusual.

Bourbon Cask
76% cacáo-content; 2017 Vintage; Aged 2.5 Years
full-on barrel slide against its sides; chocolate evaporates in the cask in favor / flavor of the obvious vanilla / caramel + refined oak & mellow clarified alcohol, not to mention a flick or two of prune & instrinsic chocolate to the bourbon beyond the chocolate bar itself; fab stack

Kampot Pepper
80.5% cacáo-content; 2015 Vintage; Aged 4 Years
breaks black grape -> meanders into classic herbal-forest meadows of Nac'l limned in quartz -> latter stage pepper surge imparts sweet espresso -> eucalyptic after-math
Quality   17.9 / 20
The good folk at To’ak have really outdone themselves on this one because… well, they’ve only themselves to outdo, considering how this label set the standard for Bentley-like A-1 prime packaging & presentation in the craft chocolate space. Mast Bros. and Marou, elegant wallpaper notwithstanding, just Kleenex® by comparison. Yep, colored snot rags next to this polished Spanish elm box accoutered with tongs so nothing gets between your tongue & chocolate (well, almost nothing).

None however go to such meticulous lengths as these (re: a loooonng time coming)

14 Manabí properties culled into post-harvest management by Servio Pachard. Then subjected to various aging protocols detailed in the accompanying booklet furnished with every package. Lots of good solid info.

The cribs notes: up to three-quarters or more of a whiskey’s flavor derives from aging. Depending on the cask, the tannins, lactones, sugars & other properties of wood interact with the bio-chemical compounds of the encased substance (in this case, chocolate).

Make no mistake: these compounds reinforce that cacáo, though potent, remains fragile. Very impressionable & malleable. Consequently, it bears the brunt of these materials exerted upon it, to lie at service to them. While overpowering would overstate the effect, the profiles herein express for the most part the extrinsic factors -- the woods used in aging. Less about chocolate per se, more about the maker's mark.