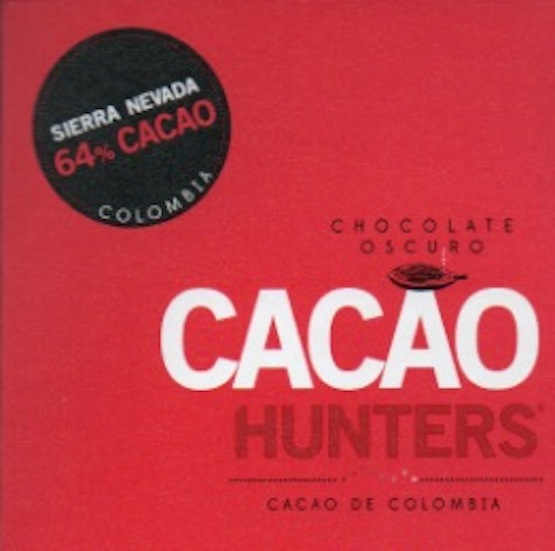 Cacao Hunters… hmmm, a phrase dropped years ago by this site to refer to J. Sandy Hepler's exploits in Nicaragua. Whether coincidence or consequence, these in-country hunters explore the home front for the first vertical integrated flight from this part-Pacific / part-Caribbean chocolate wonderland straddling the isthmus with a rich lore because of it.

The following details a Chocolate Bar Blitz – in this case 5 chocolate reviews in 1 + 2 seeds-only for a total of 7. the C-spot®still maintains its actual sampling policy of only ‘1-a-Day’ in order to obtain an accurate & thorough gauge on a chocolate; as well as to avoid inevitable palate fatigue which occurs with multi-samples in a compressed time session (no matter what so-called miracle palate cleanser may be invoked). For the sake of publishing efficiency, they’re consolidated into this single review. The overall rating & metrics (upper right) reflect a composite average of each bar's individual measures.
Appearance   4.3 / 5

Aroma   8 / 10
vibrant, stark & quite true-to-flavor
Mouthfeel   12.2 / 15
Flavor   42 / 50
Boyaca -- sourced from APROCAMPA, a youngish co-op in Pauna, Boyaca started under an alternative development program of the USAID in a heavy drug cultivation area. The member properties & planting material are new -- ICS, TSH, CCN, FESA -- but plans to recover some native cacáos with local gov’t resources are in the works.
This particular bar, a 69% lab edition, resulted thanks to an award made by Swisscontact (Cacao de Oro) & showcased at the Paris Salon du Chocolat. It all amounts to a lot of largesse for marginal returns... easy going, simple cocoa complex with spice & stone lattice works, some cream, & dry finish; good if nothing exceptional.

Arauca 70% (Lot 69) -- a draft of jungle vines, stone, nuts with a balsamic tinge, & a rubber heel all translate into direct flavors of roasted greens (strange combo in chocolate as this usually indicates "raw" / un-roasted cocoa) -> acidic stream punctuates the center of it, first white fruited (soncoya), then brown (raisin, the hangover from the aromatic balsamic) -- all in a relatively quick melt -- some chalk / mold at the very tail, followed by a cold stone edge finish.
This regional origin in the country's NE quadrant, sampled in prior incarnations by Manifesto & then Castronovo, owes its growing interest less to flavor & more to its proximity to Venezuela whose renown the producers hope will rub off on them

Tumaco -- voyages to the opposite end of Colombia's SW, seen before in Casa Luker's Tumaco Series.
smoky cocoa detected on the nose & confirmed by the tongue backed in roblé wood -> trace, but refreshing nonetheless, acidity (camu camu) cuts thru a rather basic cocoa -> develops a red spot (feijoa) & out;
a region which to date lacks any standout chocolates but one that Cacao Hunters optimizes the best so far

Sierra Nevada -- some plain seeds came along with this bar… very clear streaking white vinegar on the opening scent in banana mash; quite variegated seed sizes / shapes, easy peel (good drying) though a few unbreakables, almost uniformly dark interiors; not much to speak of in terms of flavor other than a sour-bitter green followed by that white lightning acidity, the latter quite mild & more mineralized than acetic, generally well-behaved…
as a chocolate bar these seeds translate into raisin & brown sugar sweetness on the inhale…
the 2nd Sierra Nevada of recent vintage on the heels of Castronovo which massaged pretty assiduously a higher percentage bar; Cacao Hunters elects instead to add more sugar in taming this part wild / part feral origin &, sweeter still, additional cocoa butter… yet even at a meager 64% cacáo-content this abrades stone werks, both granite rock & drupe fruits prior to blowing up a juicy grenadilla, then a black cherry bomb (or more like a brown cherry) finished off by that signature Colombian tone of marshmallow; special platinum cacáo / chocolate that will gain in stature with improved fermentation

Sierra Nevada con Leche -- 52% places this in the Dark-Milk zone though the flavor actually behaves in line with a much lower percentage (excluding the powdered Texture, a challenge when working on basic cottage-equipment)… malt & roasted corn in the air as well as the mouth chamber, decent cocoa grounding but quite dairy-centric; promising but incomplete

Casamare -- bonus addition from a Dutch trader rather than Cacao Hunters; seeds only (no chocolate bar); fairly uniform, mid-sized (right around a gram per) but plump & many cotyledons of an unusual copper color; herbal & savory including a tartar sauce strand before a sour ale finish; seems to be easy, perhaps even a joy, to work with
Quality   15.9 / 20
Despite the added cocoa butter pad & lecithin, Cacao Hunters capture some pretty austere Flavor Profiles, attributable to its processing level as much as, & probably more so, than Colombia's terra.

A ranging intro to the country's cacáo & respectable entrance from a startup.