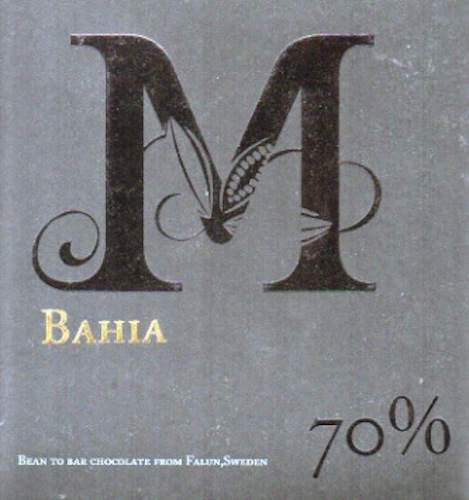 Impact
Contrary to popular opinion, the world's not going to hell in a hand basket -- it's coming to chocolate.

More proof of that rests in yet another barsmith, this one from Sweden.

So in the spirit of the Norse mythology surrounding Ragnarök in which the world disintegrates Armageddon-style only to revive anew, Metiisto seems hellbent to craft the best damn cocoa it can get its hand on to convince people the world over that all shall be fine.
Appearance   4.7 / 5

Madagascar 72%
Batch 12
So on-point this could serves as the blueprint for the Madagascan cacáo catalog of flavors -- just about each one represented in a single bar. Terrific encyclopedic symmetry. Few Madagascans offer such tour de force.
INGREDIENTS: cocoa mass, sugar, cocoa butter

Madagascar 72% with Nibs
Batch 14
The combine of earthbound Nibs + Metiisto's soaring Madagascar 72% (above) in a fine lockup in the middle. Without sacrificing the high packets, Nibs pull the center of gravity downward for added ballast to better balance the profile. Exceptional tailoring / detailing.
INGREDIENTS: cocoa mass, sugar, cocoa butter, Nibs

Madagascar Dark-Milk
56% cacáo-content; Batch 4
Ever since Cluizel Magaro Lait, Madagascar cacáo in the Milk Chocolate format presents an intriguing flavor spectrum because its berry-like flourishes offset so distinctly from the earthen elements of dairy. And where most of these typically emit high clarity even thru a heavier cream screen (e.g., Soma's Madagascar Milk at 48% cacáo-content), this pitches up near-perfect to think of milk as no less intrinsic to the cocoa compounds than the fruit notes.
Sensational. Similar to the Bahia (above) in that this undergoes very little progression (some to be sure but not a lot). No worries, for the flavor is utterly indelible: filthy rich & seductively charming.
INGREDIENTS: cocoa mass, sugar, milk powder, cocoa butter, Nibs

Capsule Summary
Smart startup with the sense to source raw material from fellow Swede Bertil Åkesson who tends cacáo properties in both Brazil & Madagascar. With quality cocoa procured, Metiisto, already a step ahead & half-way there, can concentrate on matters of good taste in its micro-refinery.