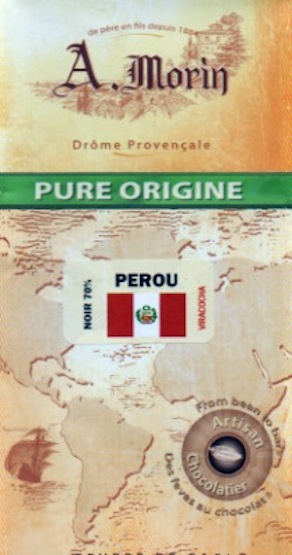 With these 2 forces at his side & at his back, Franck Morin crafts up some indelible edibles to satiate mortal Earthlings like Yvan, a 3rd sidekick bearing a common enough French name -- about as everyday as 'John' -- to keep it all grounded.

Viracocha
that dry dusty feeling from the Aroma hangs over the Flavor & so too the flowers (quite pronounced) above nuts, then citrus -> settles down somewhat into starch / grains, even linen fabric -> citrus raises back up with its own blossoms -> shifts toward herbal-cocoa

Quilla
bangs in on chocolate -> sweet roasted chicory... nothing surprising so far... upshifts on blackberry -> soars / sours to blackcurrant held in check by toasted sacha inchi... rides out in this contrastive mode thru a long gradual dissolve 'n fade covered over in almond skins
Quality   18.3 / 20
Toumi
Northwest Peru
Ever so slow & gradual a sequence which, still, hardly veers off much at all on a relatively limited range, a tribute really to this bar's constancy & staying power. Great depth & definition extended & magnified by the thick, interminable melt compounded by additional cocoa butter.

Viracocha
eastern Piura, Peru
True Peru… as much, & more so, about landscape as varietal genetics. The sense of terra immense & immediate in the vein of Coppeneur as well as Bonnat Apotequls.

Yvan
Batch 080715
Unevenly fermented; still, A. Morin handles it with palatable aplomb.
This mark's Morin's 9th regional bar covering just about the entire expanse of Peru's immense cacáo diversity -- placing him at the forefront of releases from the country. Outside of the natives, he practically owns it.

Quilla
Piura, Peru
From old growth trees in the savanna section of Piura which necessitates irrigation. Like Marañón & increasingly more sources, 50% violet & 50% white seeds.
Fantastic definition, clarity even (despite the substantial roast), & intensity. The plow-thru in this bar so powerful it dominates the senses whereby the mind melts into a flood zone of fruit-laden chocolate oblivion. Indeed, that acidic peak at mid-palate threatens to rent the chambers asunder but, as always with Morin, the added butter poises the forces into balance. Hence, the apt title Quilla (for 'keel').
A bar built as a brown monster wall.

Capsule Summary
Practically the opposite of Zotter's Peruvian éxpo -- that the softer underbelly, this the more bristling nature, an astounding statement to make about French chocolate which usually exudes finesse over force. Both have their places in the variegated countryside.