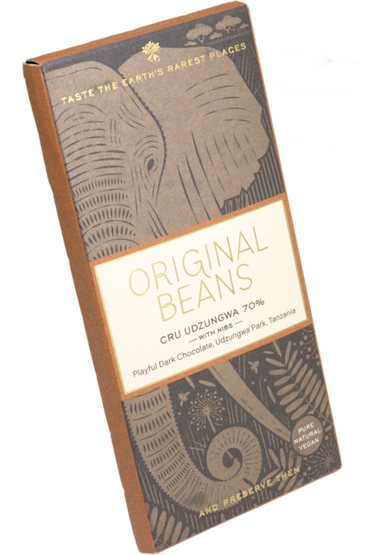 Impact
The following review features 2 bars -- a Prototype from Spring '16 and Production version over the Winter '16-'17 -- of Original Beans' Cru Udzungwa. The overall rating applies to the Production bar only.

So for an encore the label chooses another -- Udzungwa -- thanks to local handlers Kokoa Kamili in the southwest shadow of Domori's Morogoro.

They're at it again -- saving the world from itself by building a sanctuary for endangered elephants to co-exist near cacáo now that poachers & farmers encroach on wildlife. When will this band ever learn that mankind is a bunch of breeders who spew enough waste that without the likes of OB-Kamili this blue planet would be just a swirling toilet.

The secret weapon in their latest campaign: bee hives! Turns out the gentle giants are scared of the tiny stingers so they stray away from farmland into the safer confines of their natural habitat.

Aroma   7.6 / 10
Prototype Bar
cocoa dust of a near-candy quality but also somewhat gamey primates too that harkens to Hershey's lipolysis, including an herbal ass note

Production Bar
a chocolate swamp
for anyone looking to rut, look no farther... a sweaty mix in the company of rhinos, hippos & buffalos
allow it to air & their hides turn to leather
Mouthfeel   13.2 / 15
Flavor   45.4 / 50
Prototype Bar
drops down instant cocoa & just as rapidly picks up a fruit acid (baobab)... holds these parallel tracks with some sisal 'n muhuhu in the background (what the makers dub 'hay' in the liner notes)... -> nut whisper -> ripens at the tail to cherry cordial in a nod that harkens back to one of the 1st single-origin bars ever from Tanzania -- Pralus' -> out on dusky 'cocoa-lactose' (re: 'toffee' according to Original Beans; ok)

Production Bar
rice crispies (both in Texture and Taste) -> mulling spices (centered around brown sugar) -> vanilla -> rising fruit-stream that burbles from light to dark hues, supportive Earthen werks contain it -> subtle but deep licorice vein (exceptional)... call it a vanilla-licorice brittle -> kumquat blossoms (whew) -> black toffee aft-FXs to live up to the promises in the liner notes
Quality   17.8 / 20
Prototype Bar
A good pickup even if 'Cru' blandishes its status.

Production Bar
Manifold stack. The verticals on this flavor array span the depths & the heights.

Nibs tossed in the mix to approximate a coarse grind + raw cane alter the outcome... the latter especially colors the contours here.

All the good people at OB & their manufacturer Felchlin really put these seeds in the cross-hairs of the flavor matrix to broaden its potential. A bit of an overall dark pall despite its sweetness but full & expansive at that.