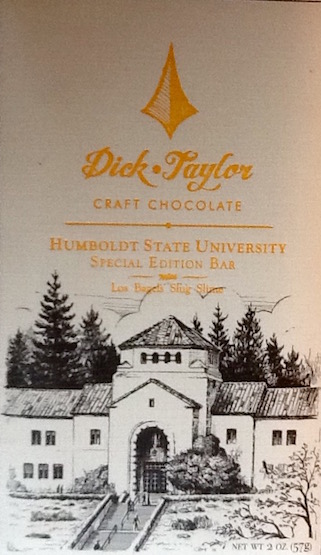 Impact
'tis back-to-skool for the mollycoddled 9-11 generation... those adorable li'l cupcakes, muffins, & flapjacks who grew up in a security-saturated era violated by –- trigger warning –- terrorism.

Guess the kids who hid under desks during Cold War nuclear test-drills were too dumb to know how to manipulate authorities (teachers, principals, parents, etc.) into getting things like less homework & more grading on a curve let alone dorms that resemble resorts.

Ergo, the free speech movement of the hippy 60s is banned. Ditto, obviously, this irreverent site with its tongue-in-cheek commentary that damages the psyche of barsmiths whose ego, invested in their business, rails against critiques passing judgment on the “subjectivity” of chocolate taste. How dare anyone. Of course, accuracy, not to mention honesty, are casualties in this impulse to just shut everything down but glowing praise.

While the C-spot™ shuns personal assassinations, focusing squarely on product, it also advocates that the best way to trump hurtful expression is to produce better expression rather than silencing people except, again, unless it laps up & kisses ass of course.

Maybe the light at the end of this dark tunnel illuminates a rainbow where cultural change liberates everyone to be free of bullying, snark, petty snipes, vanity… all the chafe of an antagonistic society hell-bent on image, money, & sex. Then again, like Revenge of the Nerds, it probably just wants to invert the social order to call the shots & meter out ridicule for their erstwhile abusers so the oppressed can become the oppressors.

Consider this half-tribute -- half because Gen 9-11 keeps coming of age & as MLK Jr. noted if God renders judgment only at the end of one’s term, who can do so beforehand -- as a wholehearted salute to Dick Taylor. In its relatively short-life, this chocolate maker frees itself from the confines of just its comfort zone & faces challenges rather than hiding from them. That alone commands respect.
Appearance   5 / 5 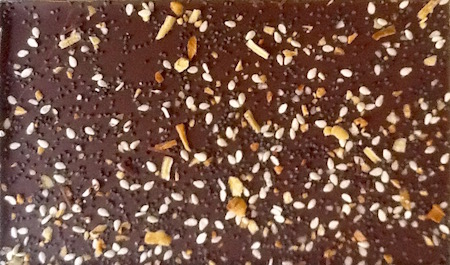 HSU
WYS2IWYG (What You See AND SMELL Is What You Get)... garlic & a whole lot more coming... meandering chocolate... sesame backup -> poppies reinforce the nut quotient -> salt kicks it all into gear & together seals it for a gestalt unimagined heretofore in this bar's progression... includes the underlying cacáo acidity so prevalent / redolent of Dick Taylor's other releases (a couple of them above)
Quality   13.7 / 20
Guatemala
Conan; Lanquín Alto Verapaz; Finca Chimelb
Recent Guatemalan cacáo has been so squamate to earn the moniker Squatemala, a sad state of affairs for a region once extolled as the zenith of chocolate culture. This shows signs of turning a corner in the origin's fortunes.

True, a motley slew -- uneven allotment both in terms of seed type (another "Trinitario"; re: no one really knows WTF it is) & fermentation rate (profile lurches on the edge of an astringent insurrection). Compounding the FX is a less than vigorous processing. And while Dick Taylor overstates the flavor with liner notes of "blackberry peach cobbler" -- they kinda appear... elements of both fruits exist, just uncoiled together -- this holds current interest &, moreover, real promise that the next harvest will be better still.

Vietnam
Mekong Delta; Cho Gao Co-op
Mekong-strong... in a stranglehold. Whereas Soma treats these same seeds with commensurate refining, Dick Taylor backs off (no overtime for this conche) & not to this cacao's advantage which calls for some push -- especially at this percentage -- in order to pull in the manifold spectrum. A sweet 'n sour compote / compost.

Basically an Everything Bagel found in shops everywhere that swaps out the bagel for a bar & the sprinkles on top (or in this case on the bottom) form an 'everyone-in-the-pool' party.

Remarkably they work together, no mean feat considering a)l the disparity in ingredients & b) Dick Taylor's base chocolate. Which all adds up to (hyper)complexity the friend of this barsmith.

Whether by design or default, winging it or engineering it, an assemblage deserving of its labeled Special Edition Bar (click image upper right to enlarge).