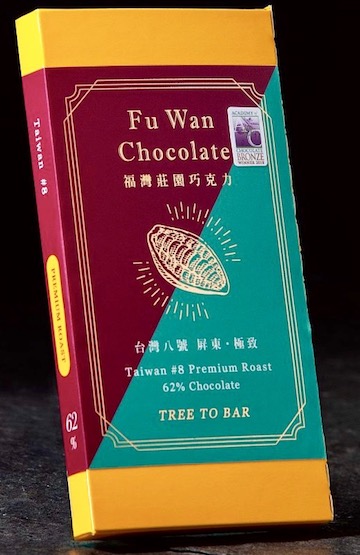 Impact
Ratings & reviews, awards & accolades, represent a mere snapshot in time. A fleeting moment. Ephemeral as a shooting star. –- the C-spot™, 2011
Such is life. Ditto biology. And chocolate too. Hence the quest for permanence... AI, robotics, biohacking, immortality.

Presumptuous (or just naïve?) for a contest committee to endorse an upstart, unless extremely precocious (think Mozart composing at age 6), to replicate exceptional results consistently. That usually requires the savoir-faire of, say, a Bonnat with its pedigree & history… ~150 years & counting of experience in its DNA.

Fu Wan Chocolate – a promising newcomer; recipient of some ribbons -- from China, errr, technically Taiwan but, ya know, the relationship’s messy, in flux.

Produced, processed & planted in Pingtung, Taiwan -- the 49th country to enter the C-spot™ Chocolate Atlas. Of course listing it separately from the mainland no doubt earns social discredit according to tally-minders of Xi's PRoC.

Then again, with Trump's posture toward 'cha-EYE-nah', such debits probably cancel each other out in trans-Pacific affairs.

Either way, 50 years on, isn’t the world glad Nixon opened up China & Clinton swung the doors of WTO to spread her wide… from summits in Tibet to shining South China seas awash with a centralized mercantilist economy, pegged currency, artificial islands for a rising military & ping-pong diplomacy (re: trade wars)?

Taiwan #9
tracks with the Aromatics -> flirts with that jelly jam found in Taiwan #8 (above) with a sorghum underbelly until bullied over by bitter mushroom & betel nut -> graham crackering toward the finish to a bracing pineapple
Quality   15.9 / 20
Emerging details of cacáo on Taiwan indicate a generally open door policy during the 1920s & 30s welcomed introductions from, it is thought, Indonesia & Malaysia. Later, circa the 1970s, material came from Brazil, presumably of the Amelonado strain.

With genetic testing on the horizon, more specificity will reveal the identity of an intensely hybridized & diversified array of cacáo types, as well their interrelationships & provenance. Stay tuned...

Taiwan #1
Expetly proportioned & tailored in its profile. Sound amplitude too; never loud but enough above hush in its spice encounters (though probably too quiet to garner much publicity).

Taiwan #3
Sweetened by "black sugar". No, not turbinado or brown sugar or molasses but 'black sugar', a form of sugar cane boiled down into a syrup on the edge of smoked roasting. Distinct.

Taiwan #8
Nice, friendly, polite. Nothing Earth-shaking, the flavor tags initially strike as pretty global / generic except in the way they progress increasingly toward distinction & come together as saccharine syrup by the end evoking tanghulu — candied fruits on a stick -- found amongst Chinese street food.

Added sugar, constituting over a third, quite high for a "Dark" Chocolate, really compensates for an active ferment to catalyze those acids into a tolerable level, as well as furnish definition. It also compromises the melt however; creating granulated sand further complicated by a hefty cocoa butter pad of max-wax factor.

Given all the issues, Fu Wan strives valiantly to harness disparate elements. Whether dumb luck or smart fortune, a charm school chocolate.

Taiwan #9
Less benign & sanguine. Attests to the need for more sugaring as demonstrated in Taiwan #8. The kind of choc that, after sampling a couple dozen others, blows competitors away with its bracing, wince-inducing volatiles to convince of its 'complexity' (in line with the 6th Law of Chocodynamics). Think a white version of Madagascar's red berry implosions (they too in want of extra sugar for catalytic conversion). Largely attributed to a Double Ferment -- an overly-expressed added-culture that, along with the cacáo pulp, doubles-down tag-team style on the 6-day fermentation.

All in all, these latter 2 bars displays volatile potency which, in due time over a greater sample size, might prove to be a hallmark of Taiwanese cacáo.