Impact
ER – Enric Rovira – equally effective for the Emergency Room or the preventive health clinic onboard the Starship Enterprise... & that only begins to cover this choco-physicist of confectioners. 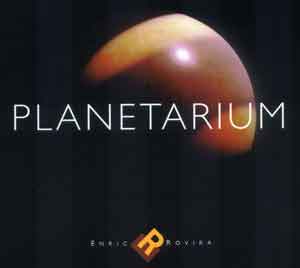 Presentation   6 / 5
a feast starting w/ the eyeballs; planetary 21st century school of design, every aspect 1st-rate from packaging to molding & finishes; good gloss on hand-injected pieces, including one brilliant collection (the solar system of celestial orbs; essentially a chocolate constellation in a box) of interstellar star-lust, while others rolled in dust; extra bonus pt
Aromas   3.8 / 5
mostly, though by no means uniformly, the whiff of old money: subdued creams, reserved cocoas, soft spices
Textures/Melt   7.4 / 10
Flavor   43.9 / 50
pronounced & true & somewhat indistinct; clarity & delineation of components save for the very end where elements fuse, mostly agreeably, though occasionally awkwardly
Quality   27.7 / 30
A tripp just short of the alchemical wonders from higher-order wizard-masters; fine nonetheless. Ventures boldly where few dare go before. The theme collections (El Systema Solara Planetarium for instance) are highly intelligent, brilliantly conceptualized, even if less than stellar in their realization of actual flavors. Among the most advanced representational works in the entire chocolate galaxy, hooking up culinary arts & science astronomy, easily rivaling & perhaps surpassing the horticultural study of Christian Constant or classification schemes by Richart. A conceptual tour de horizons & heavens, concisely summed up by 2 pieces – the Kashmiri Himilayan Saffron and the Pear Williams Sun Liqueur - which together by themselves virtually eclipse the figurative imaginations of the rest in the field.

Only medieval fanatics just getting done flogging their tongues could under-appreciate it.
Selections
Azafrán de Kashmir - whether the saffron is from Kashmir for real, the texture sure is... as in cashmere smooth (thanks to lecithin giving cacáo butter a softness of coconut oil)... until hitting bottom on a 1+mm chocolate base; extremely oxidized on the inhalation at the level of where it grows, the foothills leading to the cosmic trails of the Himalayan mountains (making it rare & difficult to obtain like heroin + more expensive than Alba truffles), & partially accounts for dark purple color compared to most other saffron’s red, & confers super potent strength: fresh-cut hay of piercing sharpness... this hi-grade 'Kong Kashmir' variety (botanically known as Crocus sativus) just a power-mower on the senses in theme w/ this bombone’s bullet-tip shape of a shell, the flavor tight yet furiously fast as flower petals blown in the wind, the mildly Dark chocolate couverture evincing almonds quickly gets on top of it w/o annihilating it (despite their power, both Theobroma cacao and Crocus sativus are intensely delicate), turning toward an amaretto-mauve movement in a well-paired & synchronized combo; easily cures melancholy; rarefied

BOMBOLAS
Jengibre - drum-shaped; hot ‘n spicy w/o being out-of-whack; a squeegee bear of ginger splays at the front then falls back into ER’s 70% fruit-bomb to set off the pleasure alarms
Naranja - once again, similar to the Jengibre but this drumstick of candied orange peel lacerates the opening only to fold into Dark Choc creating a balance of forces between orange & red fruit flavors wrapped in a purple (anthocyanin) chocolate close
Guisante - shock-suave as a smooth White Choc cue-ball counters against an interior filled by crunching dried-pea followed by wasabi-heat... eventually calmed & cooled in cacáo butter; outstanding lateral movement & well-orchestrated flavors riding out on a umami wave; eat your vegetable chocolate
Pistacho - thickly enrobed pistachios bite & break their way around Dark Choc adding their own sweet-meat to Rovira’s fruit-laden 70%; goes down rich & heavy & smoldering
Mini-Bar - hexagons inscribed w/ Gaudi mosaics; a wild & bent kind of after-dinner mint (w/o the herb, naturally); as skewed as the master architect himself by a 70% heavily freighted in fruit (very berry-centric, practically every red one under the sun) bearing down over molasses, then wipes out on asphalt tar which could all easily cower & collapse flat beneath the weight but stays top-sided... that’s how vibrant the acidity; instead, chocolate’s inherent notes auto-accent themselves, the bottom base ones drawing out those on top as salt does to foods, before proceeding on a darker course of warmth 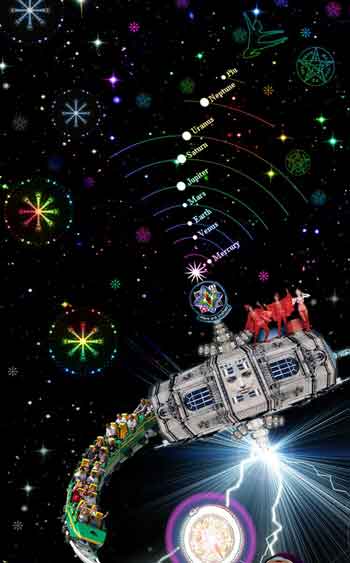 Plutón - undifferentiated shell perpetually frozen in darkness envelopes an underworld of crunching praline (almonds edged-on salted maize) w/ all the eccentric quirks of a ‘dwarf planet’ (Pluto no longer part of the Big 9 orbiting the Sun; & who thought classifying cacáo is excruciating?) at times closer to the Sun than Neptune, & rotates in the opposite direction from most others in the universe (sorta like toilet flushes between the Northern & Southern hemispheres back on Earth); very true in a ‘strangely-familiar’ / ‘familiar-stranger’ kind of way
Neptune - observed by Galileo & Voyager 2, the blue planet named for the god of the sea, dressed here in White Choc... café submerged in Dark but heavy-creamed ganache w/ enough caffeine still blowing the fastest winds in the solar system (over 800 MPH) & radiates twice as much heat as it absorbs for butterscotch-coffee FXs; a harmful-sensation; deft
Urano - ... for Uranus (careful w/ the pronunciation, please), 1st of the supreme Greek gods, the son & husband (ha!) of Mother Earth goddess – Gaia; most planets spin on a nearly perpendicular axis to the plane of their ecliptic but Uranus rotates parallel to it (Uranus' south pole points almost directly at the Sun) & likewise Campari’s bitter tonic aligns seamlessly with this Dark couverture as if cacáo were derived from cascarilla bark rather than vice-versa; exceptional
Saturno - least dense of the planets & this the lemon meringue of truffles as citrus rings around a luminous Milk Choc (very oblate in the middle, fat w/ White Choc) to cause brightness the wattage of a halo... deep chocolate interludes then become the Cassini division or gaps between the lemon bands
Júpiter - the big one, king of all gods atop Mt. Olympus ... more than twice as massive as all other planets combined; the wandering star picked up 1 night by Galileo that re-oriented our view towards Copernicus’ heliocentric cosmos (& landed Galileo in jail); 90% hydrogen / 10 helium compressed into that rare exotic ‘liquid metal’ at 4 million bars (i.e., basically 4 million standard Earth atmospheres at sea-level; in other words, ‘crushing’); this piece a gaseous affair of thick orange extract leaking ooze out the core to form a sticky shell that gets licked by condensed cocoa tannins from within to recall the spectacular collision in 1994 between Jupiter & the Comet Shoemaker-Levy 9; the fusion of chocolate-orange (one correlates to the planet’s lower cloud belt, the other its higher altitude) creates a Ziggy Stardust full of atmospheric & magnetic ‘drag’, feeling how Jupiter’s magnetosphere is far more powerful than Earth’s Van Allen belts & would be fatal to mere mortal human beings; primordial
Marte - god of war but also, before then, of agriculture so terraforming the Red Planet may be fertile after all... if we figure out how to melt the dry-ice at its poles to fill those Martian canals, the opposite challenge to controlling the water-activity of Earl Grey Tea (or any tea for that matter) in a chocolate truffle... accomplished here, at least partially, by layering on the bergamot so there’s little lateral movement, just as there are no tectonic plates on Mars to shift its surface around; the ultimate crash diet – avg pressure just 7 millibars or 1% of Earth’s – this Dark piece comes w/o any no-no fats from, say, a dairy-rich Milk Chocolate to erode any doubts about the question ‘is there life on Mars?’
Tierra - 3rd rock, terra mater, Mother Earth, whom we love & abuse most; the only planet whose name is not derived from Greek/Roman mythology; roughly 4.5 billions years & counting but no record yet exists of the critical period when life began here, but this piece springs from a curious mash of elements (salt, Jamaican pepper [widely knows as ‘allspice’], White and Dark couverture) forced in a subduction into a (given that the we’re covered in 70% ocean) salt-water taffy flowing w/ berry-inflected chocolate... the end leaves a little burn in recognition of temperatures at Earth’s core stoke hotter than the surface of the Sun; turgid
Venus - Earth’s sister planet; by any other name a classic gianduja beauty (a viscous lava flow of uniform Milk Choc frames an actively volcanic hazelnut paste lovingly amplified in a hot spot of salt); flavor as true & loyal as Venus' orbit -- the most nearly circular of any planet, an eccentricity of less than 1%, & her periods of rotation synchronized such that she always presents the same face toward Earth when the 2 are at their closest approach
Mercurio – god of commerce, travel, & thievery moving closest to the sun & quickly across the sky whose highly eccentric orbit - explained most dramatically by Einstein’s Theory of Relatively - generates bizarre disorienting motions if standing on its surface; here its iron ore core represented by a Milk Choc counteracts the thin atmosphere blasted by solar winds of maybe the 3 Cs (coriander, cardamom, & clove) boiling up molasses & fig undercurrents to form molten caramel; ahhhh... mercurial

Sol – G2 star, 99.8% of all mass in the solar system, placing it in the upper ten-percentile of its star-class, in other words, magna cum laude; the outer layers spin in differential rotation: at the equator the surface rotates once every 25.4 days, near the poles as long as 36 days, due to the Sun not being a solid body & Rovira redirects that fact into delicately perfumed White Chocolate, essentially burning butter... the ultimate nuclear fusion reactor at thousands of trillions of megaWatts, generating tons of radioactive gamma rays provided by Pear Williams liqueur heating it up so intense that so-called ‘hot spots’ (re: sugar) on the photosphere surface are the cool zones, creating a beautiful partial eclipse -- a solar corona of pear blossoms, occasionally ejecting solar flares that jam signals, causing sensory interference like an aurora borealis... continues to radiate peacefully for about, mataphorically, 5 billion years or so, its luminosity approximately doubling in that time... eventually runs out of fuel, forcing radical changes which, though commonplace by stellar standards, result in the total destruction of at least one of its satellites - Earth - whence it hits the kill-switch on a fragrant memory