Impact
Midtown Manhattan... walking along with Amano Art Pollard who whips out his latest release just as a bevy of beauties strut by celebrating Summer Madness (whom some might think forgot to dress before heading out for the night or could be on their way to work... to see a well-heeled client). No micro-minis or sleeves at all... just panties ‘n sandaled pumps (topless or halter-top completely optional).

This bar prematurely creams its box in perfect tandem with the scenery / humanity.
Appearance   3 / 5

Aroma   8.3 / 10
an atypical “place”-mat (re: terroir territory) for laid-back nuts & vines, then comes the pungent punch (both fruit & cheese funk)... whew, flaring the nostrils / popping the eyeballs -> twine binds it all together; none of the usual suspects from here until eventually aerates cocoa dust & smoked balsamic to infer this locale’s archetypes (molasses / berries / must) -> sticky dried fruit
Mouthfeel   12.9 / 15
Flavor   39.6 / 50
initial cream-front immediately gives way to the tail of the Aroma -- but sour rather than sweetly reduced -> black velvet apricot (... never had one?; try one) still hanging on its branch, brushing the pulp as if the mordant ferment box made from a hard wood (araguany?) w/ its bittering quercetin compound fixes the dye for more fruits... now drawn into an ill-defined mash w/ leguminous vines (barbasco) tossed in the mix -> lots of skin in the game thrashing about (mango skins, plum skins, blueberry skins, cocona skins) -> tonka-cocoa blush hastens a passing caramel then rapidly onto a Port Sherry finish interrupted by astringent raw-like cacáo (untamed random phenols) accented in confused hazelnut under yellow gooseberry & cocona
Quality   14.8 / 20
Doomed to succeed. 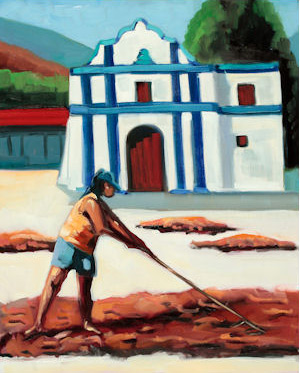 The package reads “Signature Collection”, a situation that obtains on the pen of guileful Art Pollard signing for delivery of these beans from his usual mentor – cacáo-broker / chocolate maven Maricel Presilla who knows Venezuela almost like the back of her hand? Or maybe he received them from some other muse. Whoever, she might as well be the one depicted on the art work gracing this bar’s museum-quality package, appointed with gold-leaf pods on the inner lip fold, sweeping up the “cream” of the crop in front of Chuao village’s still-revered church plaza... but for other reasons of faith.

Rather than praying on her knees, the tender stands taller than the church itself, a vanishing relic now that chocolate is no longer sacralized in a secular world, no longer attains “higher” meaning in the making (as in millennias past, undermining ‘genuineness’ in the objective material sense), just worshipped by the chocoscenti for its sensory properties whose seeds are more valued than indulgences paid to get into heaven, which could’ve hatched the saying ‘time is money’ since few want to spend any of it in hell.

This, therefore, an exotic production of its own exotic purpose, rekindling Renaissance notions (apt since we’re experiencing a chocolate rebirth in the West) when ‘authenticity’ meant ‘sincerity’. In part because villagers there in Chuao still go about life in a relaxed time-honored manner, refusing to punch-in the endless clock sheets & bow before the clonal-commodities that a few “cocoa-gurus” in calculating tiny math tables advised them on (‘if they only utilized HDP [High-Density Planting] of high-yield “Forastero” with high-labor input hours... ba ba ba... then the people would earn enough to give up their hammocks & afternoon swims in the Caribbean to buy PCs they can stare at in order to read this priceless advice... until they go blind’ [let such "consultants" remain anonymous in shame]).

Refreshing really, for while we search for the genuine article in a nostalgic perhaps mythic past, most “Others” seek it in our present -- wanting American jeans & polo shirts. (So we confound them with Levi’s™ made in China.)

Back on the cacáo trail, the woman apparently selected especially well & lustfully raked it in. Hence the “Reserve Dark” status printed on the cover.

Or does that & ‘signature’ refer to Art handcrafting this allotment himself instead of allowing staff or interns to handle it?

In any event, he executes to the nth degree in calibrating temperature throughtout the process from roast, conche & temper conforming to Amano’s trademark technique: generally rough-hewn & lightly underdeveloped though not necessarily unrefined.

In this chocolate, however, it is; or at least ungrooved. And unlike any other from Chuao.

It briefly and deceptively unwinds in the reverse direction of Pralus’ village Chuao & very much like another Chuao chocolate – the puzzle piece that comes from a remove well outside Chuao - the one farther to the east in Hacienda San José at Paria, Venezuela which furnished Domori’s ‘Chuao’. The flash cream-front opening here tantalizes that she might’ve conferred with the Franceschis, the proprietors of Hacienda San José, on where to find those select-grade Chuao of stronger Criollo germplasm (almost Porcelana-level) they transplanted to their estate back in the roaring '90s insofar as that’s how close they taste to each other at the very outset... sharing a certain tone & scale... before the full onslaught of reality hits.

Weirdly, this a small Chuao whose bright, raw character paradoxically fools of size due, again, to Amano’s technique & Chuao being among the most masculine of cacáos, vamped in this bar with pretty much the full make-up kit (cocoa mass, sugar, cacáo butter added back, vanilla [the wooded aspects transmute the latter into bitter tonka bean] – everything but the lecithin). It flirts with the inner-female of Marcolini’s Chuao yet it barely contains itself; the tarted-up drag busting out of her lace bra ‘n panties but instead of reaching climax, it kisses off a bit of a teaser. As if Amano learned a cheap-lesson from its exorbitantly-awarded & equally-acerbic Madagascar: namely, that right next to sex & fruit-bomb California Cabs, tutti-fruitti chocolate sells.

All in the dating game between source of origin & bar-smith. In this case a mismatch of a varietal to a house style.

Currently the least among Chuaos; Amano once more leaves flavor-tags in the machine awaiting further fruition. (Stay tuned: an even lesser Chuao is on the way.)

But Chuao, too big to fail, still manages to survive a crushing heartbreak.