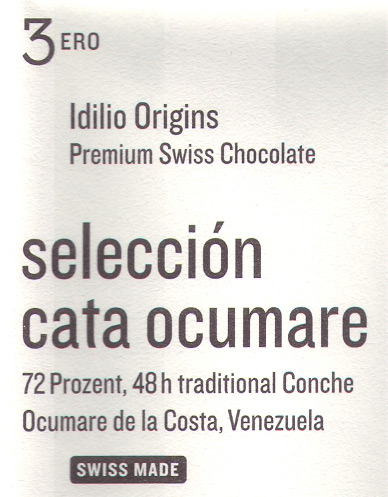 Impact
Bertrand Russell observed that science covers the known; philosophy the unknown. To all scientists confounded by cacáo's myriad of compounds in seeking synthetic ‘chocolate flavoring’, please listen to Joni Mitchell’s Both Sides Now... (to paraphrase: ya really don’t know chocolate at all).

And so fated to pretend, let’s philosophize about it in metaphors.

This turns hay into something that was once good as gold in the Mayan world: chocolate. Plain & simple (... plus a li'l swig o' moonshine with it).

In a world replete with great Ocumares (are there any bad ones?; well, OK, if you insist check here), this tastes rather rare if short of completely unique.

Conching here diametric to Idilio's other finished bars. Leaves quite a few volatiles in the vat for some chocolate liquor - literally, which the unconched sugar version in Idilio's Ocumare Crude trapped like a gravel pit. Here, rum-like vapors form a jet stream in the mode of Domori that sustain the length, & neither they nor the preceding sour ever overtake the progression, though they subsume & transmute that spectacular chocolate entrance.

Some pals (palates) may feel the heat as too hot to contain, a bar busting its britches. But this avoids the sluggish boredom witnessed in other Idilios, such as its SdL or Porcelana while still allowing a "see-thru" of the vapor trails onto the rest of the profile.

Combination hi-roast / lo-conche gets the job done. The rest of it – just the compound secret of cacáo.