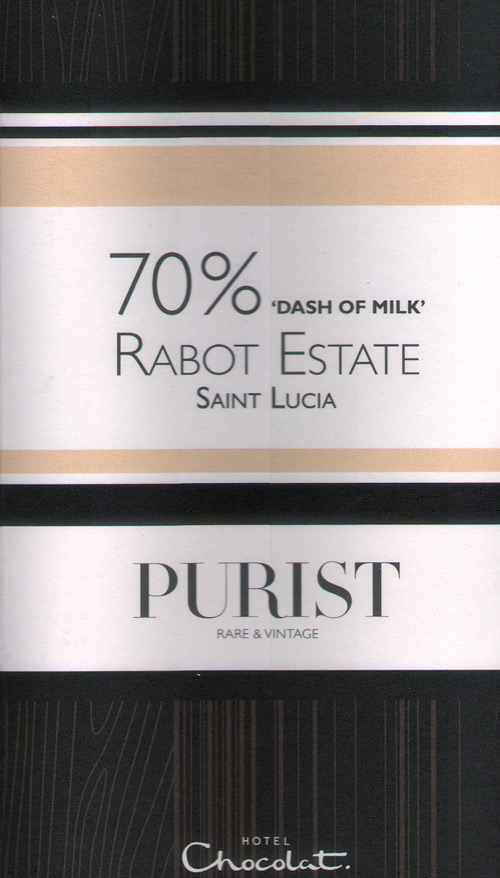 Impact
To the Personnel Providing Security on the Grounds of Hotel Chocolat: for the sake of all guests, please re-check the papers on this “Criollo-rich Trinitario”, as well as the ferment boxes for any evidence of unsealed wood, the drying technique (which in this case includes properly inspecting the emergency sprinkler system & fire extinguishers in the hallways as well as guest rooms), & arrange for plenty of hessian sacks (in which these beans were stored) to be re-purposed into body bags.

Finally, terminate whoever ordered this act of bio-terrorism.

A disaster in the very making. Not since the Windsor Castle conflagration of 1992 has England had to observe so helplessly.
Appearance   4.2 / 5

Aroma   8.1 / 10
milk & vanilla mollify this bar’s Darker brother-of-the-same mother... the fruits curtailed, the molasses recessed as tobacco billows some & crème anglaise pours lightly over hard volcanic cocoa punctured by a fine pine cone -> eventuates chocolate-hazelnuts
Mouthfeel   5.3 / 15
Flavor   34.8 / 50
loads in praliné -> vulcanized chocolate hard on its heels -> deep toffee cut by bittering pitch pine -> dairy clods of some hoof -> a first in the annals of the C-spot™: a hair strand (strawberry blonde... hmmm, food-critics in the UK prefer strawberries ‘n cream, don’t they?) followed by an undisclosed fragment... both pulled from the chasm before a lavalanche swallows all in molten charcoal culminating in burnt hessian (much worse used to commonly show up in candy bars & sometimes still does: dirt, brick dust & lead)
Quality   12.6 / 20
Odd, a DM at a higher percentage than HC’s darkest Rabot to date (as of 2011). Guess it fears to even dare go there without the milk ‘n vanilla crutches, seeing how it’s 65% Dark poured a hard lavalanche.

While already attempted by Slitti with Lattenero, 70% DM still approaches the upper reaches, although nowhere near scaling the max of the format in Santander's Mayan Dark (nor the finesse of either).

The proverbial lump of coal & just a “dash of milk” provides the lighter fluid for Coppeneur, the actual author of this & no stranger to the category (this, that, here and there, plus again, then yet again) to put all its skills to the test (& then some)... the ones it brought to bear on another rambunctious origin in dousing the smoldering peat of PNG.

Pity poor Coppeneur though; how to deal with this rebellious bean? Assault it with high torrefaction (done); 48-hour conche (quite sufficient except, compared this compound’s 120-hour sibling, it raises suspicions the electricity was cut off); vanilla (plenty); plus milk (yep)... & still no suppressing it. Torching the roast, in fact, only provokes it further! Ditto the peculiar goat’s throat to the milk flavor which retards any remaining acidity to the cocoa.

A calamity; one the most bizarre bars out there. Could do to Coppeneur’s stock what the Gulf spill did for BP: virtually sink it. (Unless, of course, it deferred upon receiving the beans & advised the client with 'only if you insist...')