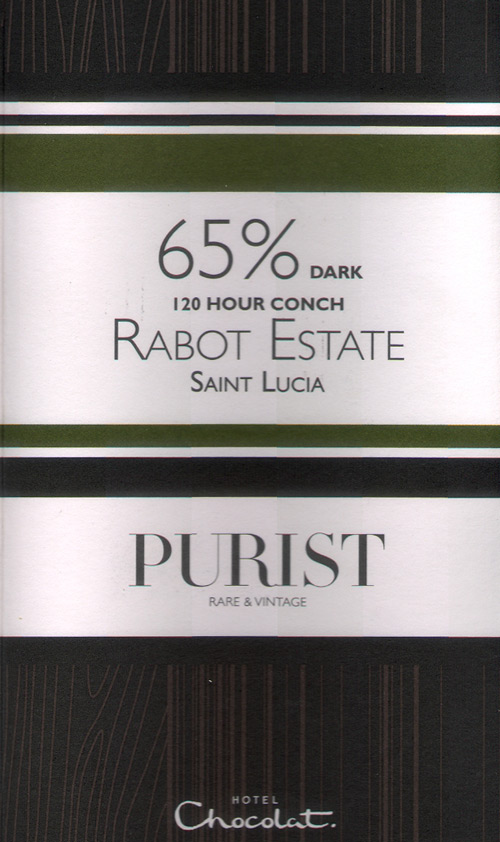 Impact
Pressure can bust pipes, produce diamonds or, in the case of a chocolate getting beaten down enough, make 'black pudding'. It's usually a type of sausage featuring blood mixed with some meat-filler (or occasionally just fat) until thick enough to congeal. Enjoyed in the UK where they’ve a strange notion of ‘pudding’.

UPDATE: 5 years on & Hotel Chocolat releases another Rabot Estate bar -- at 70% instead of the original 65%. Below are segments for both bars. The metrics & overall rating however pertain to the 70% only.
Appearance   4.4 / 5

70%
reclined in contrast to its earlier 65% iteration (above)
those woodlands portrayed in the 100% unsweetened cleared some to make room for grasslands & lemongrass
Mouthfeel   12 / 15
Flavor   43.6 / 50
65%
natural caramel undercut in volcanic cocoa -> lightens & brightens some on guanabana + gooseberry -> then the eruption truly begins, oozing back to 'molava' (lava of molasses), just swamps the tongue... those fruit acids now vaporize up to ‘slimeapple’ (a moosh of pine & wine) & hover over über-sweet asphalt-molasses (dense & thick) -> plunges out bee-spit mistaken for a ‘honey’ chocolate kiss

Liner notes speak the olden language of Criollo-rich “Trinitarios”, DNA-tested at that by university geneticists whose identity remains undisclosed. If true, Angus Thirlwell, CEO of Hotel Chocolat, ranks among one of the very few who takes both his trees & their genes seriously, as opposed to the scads of growers who talk one way & walk another.

65% in a 120-hour conche cycle also speaks to a more complicated reality of genotype and territory. Why else would Coppeneur, the actual bar-smith, accustomed to higher threshold percentages, put this thru the paces for so long (the time it takes Zotter to whip 10 different batches of more gratifying results) & with so much sugar (almost a third)?

An inordinately lengthy conche – an entire business week including overtime - first experienced in a 100-hour Chuao as a literal object-lesson in turning ‘n churning.

Where it works there, it mostly spins its wheels here (or paddles as the case may be). Just no getting around the rambunctious beans – long in the mouth & long in the tooth too. Rather unforgiving & way too bottom heavy, the molasses quivering-sweet in the way wheatgrass causes the body to shudder, beaten down only to harden into a strongbox formed at uncomplimentary angles. HC elected mercifully to forgo any vanilla which otherwise would turn this into a deadly tar pit.

A bean that calls for a more traditional medium-hi roast & mid-term conche.

Very much the offspring of its 100% parent (the pods fallen right under the tree) & a streamlined improvement over its 65% sib (above).

Nothing fanciful; just goes in there very workmanlike & gets the job done (perhaps a little over budget & behind schedule -- the latter due to a clumped Texture).

Not a chocolate 'to die for' but one to live with.