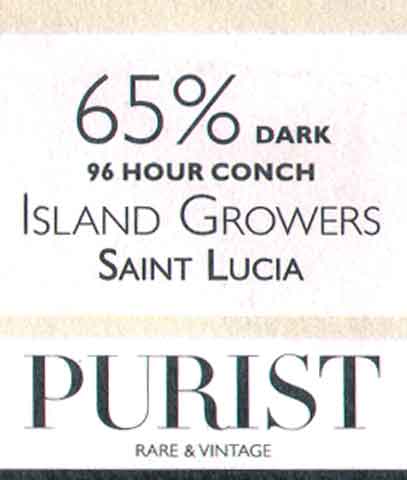 Impact
Believing this to be just another welterweight tipping the scales at a skimpy 65% only invites opening the mouth to grave risk of its enormous punching power. Gram-for-gram this brings down the hammers of Pac-Man Pacquiao & just knocks it out.
Appearance   4.6 / 5

Clearly, some farms on St. Lucia grow ‘the really good stuff’, providing an island wide panorama on this origin compared to the telescoped bars from the single-estate Rabot. The fruited-analogs of ICS-95 treated to a healthy ferment can be gleaned in the mix. By selecting from a broader spectrum, this bar tempers Rabot’s micro-topography which really blows the gene pool up with its caustic volcanic material. The wider island growers' chocolate here shows much better agronomy, soil management &/or genetic content.

The upshot: enormous punching power for a 65% - no added cocoa butter accounts for some of that. Also, in simultaneously downshifting to a lower percentage while increasing the conche length generates greater suspension of sugar along the cocoa particles. In the process, Coppeneur (the actual behind-the-scenes maker of this private label offering) cleans up the flaws found in Hotel Chocolat’s inaugural release from St. Lucia – the 72%. The configuration & technique arrest some of the tannic force to highlight those contrastive acids & polish this bar into a dark beauty. Cutting no corners, it covers everyone of them instead: tremendous symmetry, blance, cohesion & stamina.