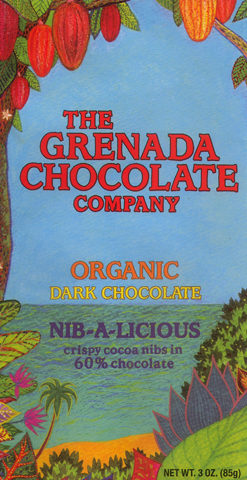 Impact
Friend-of-the-Earth Mott Green, always outnumbered / never outgunned, takes on the much larger forces of the Grenada Cocoa Association with his brand of the ‘dirty dozen’ – 12 or so organic growers - & ups the firepower by spring-loading his li’l tugboat of a 60% with some hi-gauged Nibs.

Whereas the big Cocoa Association supplying the likes of Chocovic, S-B, and Felchlin (the last via Larry Burdick) moves around 5,000 lbs /week, Mott & Crew might do a fifth of that.

An RPG that launches a fruit bomb that buzzes the tower, then shreds the mouth chamber louder than a bunker buster.

40% sugar covers for a lot technical flaws evidenced in this label’s 82%, as well as catalyzes phenomenally ridiculous fruit tones. Beyond that, this comes in as a superior batch (cacáo works that way).

The Grenada brethren throw down the gauntlet, using Nibs to just nail all those fruited by-notes to the roof of the mouth hanging – no, dripping really - like so many licks of stalactites which the tongue happily laps at. The chocolate-lava flows then submerge any escape routes.

Though the CBS (Cocoa mass / Butter / Sugar ratio) officially lists 7:11:10, the Nibs easily toss this to near parity for a mutual balance of forces, reconfirming the assessment made while reviewing the 82% that this year’s crop at least could stand a little butter put-back.

All those contrastive elements (smooth chocolate set against crunching Nibs) reconcile shockingly well post ipso facto. The proportion of Nibs-to-Chocolate pitched just right, so that it adds up to a compound that plays much bigger than the sum of its parts. Well in the range of 75% or more (certainly to the Texture weight & Flavor level of Burdick’s Grenada 75%), but with a super sweet spot to rival ki’Xocoatl, thanks in large measure to a ferment that ripened these beans to a succulent prime for close to a whole week.

Not a very good bar, just a great one.