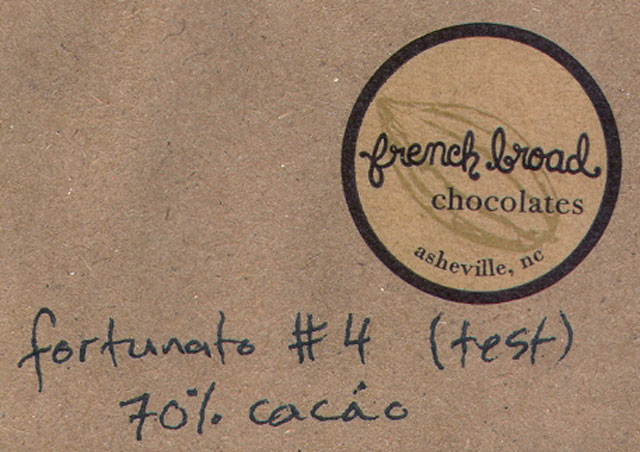 Though printed right on the label that this is a only test, they should've finished the warning with '... of the emergency broadcasting system" because this bar just bombs it.
Appearance   3.4 / 5

an alluring mix of Amedei and Bonnat's Porcelanas (& none of that faux-Porcelana Apotequil nor white-seeded Piura but the real Venzy deal... toasted bread crumbs drizzled in soft nut & olive oils, the latter with its green elements intact [olive leaf, grilled / roasted artochoke leaves & a smoked tobacco lite)
plus apricot blossom marmalade (as if shipped in from the D.R. -- or the other way around considering that Marañón Canyon Peru lies closer to the center of cacáo's species origin)
... all joined kebob-style by sticks made from pliable wood barks (the vanilla-orchid likeness in balsam of Peru & the rosiness to Palo Santo / Holy Wood)

none finer
Mouthfeel   11 / 15
Flavor   45.8 / 50
anticipation spelled out in the Aroma quickens the heart-rate & the Flavor leads to a full cardiac starting on roasted chocolate with an underlying chicory over hickory wood chips -> fruit tang (cocona) -> cerealizes some around barley malt -> finer woods (just a veneer rather than any bark & bite) take over the progression -> jasmine backstrokes at the nape of the neck glands (achingly subtle) -> fruit resurgence, this one sweeter, moraberry... in a mocha base -> nut finale (mac & almond) -> café the aftermath
Quality   17.8 / 20
French Broad is the first artisanal barsmith to craft bean-to-bar chocolate from Fortunato No.4 seed stock. Heretofore all others have either been in-house prototypes or re-melted from block couverture manufactured by a Swiss firm.

Marañón released this particular allotment in support of American micro-processors.

Arguably (& premium chocolate occasionally engenders heated arguments) the most optimal of F-4s to date, save for Texture (hard to best the hyper Swiss process in that respect, especially factoring in its 6% added butter pad which this does not contain). Clearly a compromise in the processing parameters, refined here only 19 hours at a speedy 90RPM, that sacrifices some mouthfeel in order to spare the remaining floral volatiles left after the rather warm roast, averaging 295ºF over 30 long minutes.

True, those flowers which make Nacional famous are reduced to tantalizers, background harmony to the fore-notes.

So this exhibits neither, on the downside, the vivid floral imprint of a lighter process nor, on the upside, the prickly tannins customary to the varietal.

Instead, a full spectrum flavor of very round contour -- nary a jag or spike in the progression. It hits mainly in the midrange to reconcile the polarity that bedevils Nacional endemically. (Though in all fairness to the pure Peruvian cultivar, it ages beautifully... softening the extremes & filling in the center tastes nicely; in less than a year the Swiss-made Fortunato No. 4 climbed 5 points in the Census, a virtual quantum leap considering it started out with a very respectable baseline rating.)

Certainly French Broad's is less active & sexy than that couverture version whose high (& rarefied) acidity partially explains why pastry chefs go ga-ga over it. Those very volatiles provide a dynamic canvas for them to work on, similar to cacáo from Madagascar.

But as an eating bar, this one is debatably more, dare say, "finished" right from the release date.

Let's hope the upcoming limited edition production run will surpass this test batch for the apotheosis of F-4.