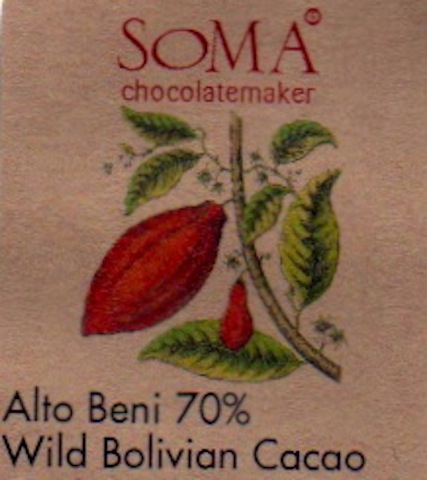 Impact
Canadian chocolate fascinates for all its latitudinal angles. Cacáo from the deep south processed into chocolate in the far north, far from its source… from the equator to the poles; the tropics to the arctic; the polar opposites of rainforests & glaciers. The equivalent of a penguin waddling thru the jungle.

Leave it to David Castellan from Soma Chocolatemaker to bridge the gulf via John Nanci aka The Chocolate Alchemist who supplied the seeds for this bar.
Appearance   4.2 / 5

Even the flaws -- such as the astringent residuals from an incomplete fermentation -- taste welcome, a sign of an ever friendly cacáo type.

Soma goes for a middle approach in its processing perimeters -- from the slightly cooler-than-average roast to the even-keeled conche.

Very much the sibship of other great Benianos (The Cru, Tranquilidad, Silvestre & Oialla) although the fantastical tale on the wrapper about this cacáo being wild-harvested on islands made of pottery shards smacks of a Disney production. As one veteran of the Bolivian scene relays, "pottery can be found easily around San Ignacio de Moxos & in the Itenez Province around Baures but islands built of pottery shards sounds like someone brewing something to strong with their alchemy set".